Soldiers and lovers: Romance blossoms on the battlefield 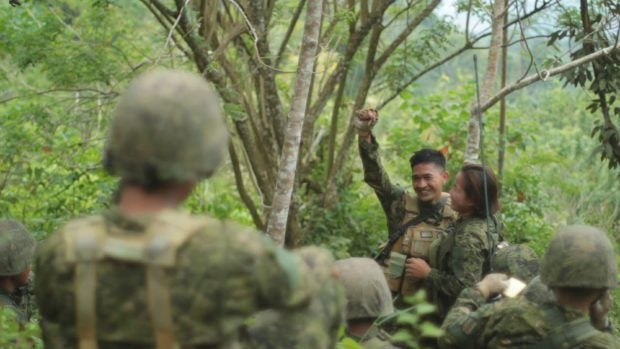 BAGUMBAYAN, Sultan Kudarat — A day before lovers celebrated Valentine’s Day worldwide on Wednesday, two soldiers became engaged, not in a fancy restaurant or an upscale resort but in the middle of a battlefield.

Soldiers from the Army’s 33rd Infantry “Makabayan” Battalion were searching for communist rebels in the mountains of Sitio 2 in Barangay Titulok here when Pvt. Christine Porcadilla, 26, the platoon’s medic, had the surprise of her life.

“It was a long walk. We were all exhausted, so we slumped down for a break,” Porcadilla said. “Suddenly, he came kneeling in front of me and I looked up to see the whole team holding papers, which read, ‘Will you marry me?’”

She was describing how Cpl. Denemar Albani, 27, the platoon radioman, was proposing marriage.

Overwhelmed, she could not utter a single word even as Albani was already holding her hands.

“It was the happiest day in my life in combat operation,” she added.

Porcadilla, who hails from Esperanza, Sultan Kudarat, first caught Albani’s eye as early as 2014, when she was a new member of the Citizens Armed Forces Geographical Unit (Cafgu) in her province.

She was then pursuing a bachelor of science degree in criminology and after Cafgu class, she would report straight to the barracks for duty.

“I saw her there and I love everything about her,” recalled Albani, a native of Zamboanga City.

“She always makes me smile,” he said. “She jokes a lot. She’s very thoughtful. I was touched by her honesty, so I gave her a chocolate, a bar of Snickers.”

Porcadilla said Albani’s chocolate gift was “just a token of friendship.” But she admitted she was already drawn to him. “He’s so handsome.”

When Albani was assigned to another place, they had no contact for one year.

“We no longer had any communication. It was also difficult to establish any relationship at that time because the call of duty was so strong,” Albani said. “I was deployed in Kulasi and the last I heard from her was that she was at the town proper.”

Porcadilla said she had thought he found another love. But 10 days after Valentine’s Day last year, they saw each other again.

Albani and his team were instructed to secure a vehicle being used by new Army graduates.

“We escorted the truck. Our officers called them down for formation and then there were two female soldiers. The other one had a familiar face and my heart leaped. I could hardly believe what I saw,” Albani said.

It was Porcadilla, who had decided to join the Army.

“I thought I lost everything I felt for her when we lost communication for a long time. But when I saw her, I was determined to make her my wife,” Albani said.

So, on the eve of Valentine’s Day, he asked his colleagues in the platoon to help him deliver his marriage proposal.

While they took a rest after hours of hiking in the mountains, Albani suddenly knelt in front of her and announced his intention.

The surprised medic could only smile and whisper her reply.

Hours later, the two showed up at the office of Lt. Col. Harold Cabunoc, 33rd IB commander, to ask for his guidance and approval.

“Oh my, my soldiers asked my consent for them to marry!” Cabunoc posted on his social media account. “What shall I say?”

Later, he wrote with amusement, “There you go, I signed it because you want it.”

Cabunoc said both had completed all the requirements, including the Cenomar (certificate of no marriage), set forth before one could join the Army.

The couple had been together since last year when they were both assigned to the Special Reaction Platoon.

Cabunoc said Porcadilla was one of his snipers during a military encounter last year with members of the Bangsamoro Islamic Freedom Fighters in Sitio Pedtad, Barangay Midpandacan, in Gen. SK Pendatun, Maguindanao.

He said she was tough even as she helped treat wounded enemies.

Porcadilla herself admitted that she looked tougher than Albani. “He’s so fair. I even look more masculine than he,” she said.

Her fellow soldiers used to tease her how she courted him when they got wind of their relationship. “No, I did not force him to marry me,” she said, chuckling.

The woman has yet to get over her surprise how Albani chose the battlefield as site for his marriage proposal, and in the middle of an operation.

But marriage might not end Porcadilla’s life as a soldier.

“It’s time to start a family and I would respect my future wife’s decision if she wants to stay in the military,” Albani said. “What is important is we love each other.”