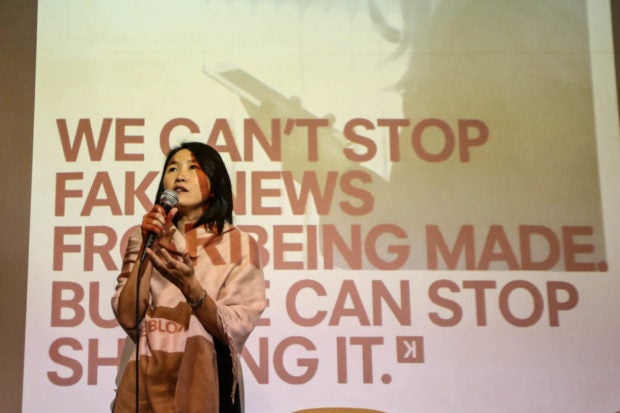 FORUM ON FAKENEWS Sunsun Lim, head of the Humanities, Arts and Social Sciences Department of Singapore University of Technology and Design, makes a point on the last day of the Democracy and Disinformation Forum on fake news on the Ateneo Rockwell campus in Makati City. —JAMSTA. ROSA

The International Criminal Court (ICC) Facebook page was swarmed by supporters of President Rodrigo Duterte soon after Chief Prosecutor Fatou Bensouda announced that she had begun a preliminary examination of allegations of crimes against humanity in connection with the administration’s war on drugs, an online activist said on Tuesday.

“All the posts of the past two days have been swarmed and attacked by Filipino trolls. Every single post. And it’s crazy and it’s full of non sequiturs,” said Carlos Nazareno, a computer programmer who corrects erroneous online information on martial law and the late dictator Ferdinand Marcos and his family to prevent historical revisionism.

Bensouda informed the Philippine Embassy in The Hague last week that she would be opening the preliminary examination in response to a complaint filed last year by lawyer Jude Josue Sabio, who alleged that the “Davao Death Squad” killings when Mr. Duterte was mayor of the city had been rolled out on a national scale and victimized thousands after the President took office in 2016.

On the second day of the Democracy and Disinformation Forum on fake news and disinformation, Nazareno said Filipino trolls were making unrelated comments to posts on the ICC Facebook page.

In one post by the ICC marking the international day against child soldiers, Mr. Duterte’s supporters reacted by pointing to the Dengvaxia controversy in the Philippines, which they blamed on the administration of the President’s predecessor, Benigno Aquino III.

An ICC invitation for internship got a response from one user who said, “Our president just following the whims of the voters the common people.”

“Dont interfere with our country. We will use our vodoo witch craft to defend our president,” the user said.

Another warned that “oligarchs” were “desperate to oust our President” also because “Marcos is now approaching as the real Vice President,” referring to the late dictator’s son, who is questioning the electoral victory of Vice President Leni Robredo. He added that the “ICC is being manipulated.”

“We must stop this illegal organization..violating and insulting our democracy and sovereignty,” he added.

Aside from defending the President, the Facebook users also slammed the opposition, particularly Aquino’s Liberal Party. There were also some calls for the ICC to also investigate alleged child soldiers used by the New People’s Army, the armed wing of the Communist Party of the Philippines.

Nazareno did not say how many such comments had poured into the ICC Facebook page.

He said his advocacy had led him to discover how robust disinformation was in the country, where there were more fake news sites than the combined fakes news sites around the world.

“As of two to three weeks ago, there were 59 combined fake news international websites. There were 94 Filipino fake news sites,” Nazareno said.

As a way to fight disinformation, Nazareno said the public must demand, among other things, accountability from Facebook.

He lamented that legitimate posts have been taken down by Facebook and equally legitimate Facebook pages have been suspended through mass reporting by troll armies serving the administration.

“The problem here is the system is being gamed by the trolls,” Nazareno said.

Mass media experts, bloggers, academicians and journalists at the two-day forum have agreed on the need to reclaim space for conversation and for traditional media to do its part in combating fake news and disinformation.

“The number of likes on Facebook has become a surrogate for democratic values. But democracy is not just popularity,” warned Cherian George of the Singapore-based Asia Journalism Forum.

“We empower it with every post, every like, every tweet, every retweet,” Leonen said. “It has the ability to inform. More dangerously it also has the ability to erase attention, create digital amnesia and dull critical thinking. We have to be aware of all these and guard against them.”

The academic community is also being challenged and has to stand up against the spread of fake news and disinformation that make people gullible, according to Fr. Jet Villarin, president of Ateneo de Manila University.

Villarin said schools needed to continue teaching that “one plus one equals two even if someone insists it’s three.”

De La Salle University president Bro. Armin Luistro said that while dissenters felt there was strength in numbers, what the country needed were truth tellers “who will say, ‘The emperor has no clothes.’”

University of the Philippines communications professor Clarissa David said journalists, especially those from the traditional media, must provide their reportage with analysis and context.

David said the public has to “learn that having real information is important versus saying, ‘I don’t care about the facts. I support this administration.’”

The forum was aimed at threshing out how disinformation has affected citizens’ fundamental freedoms and how different sectors can push back against the proliferation of fake news to protect democracy in the country.

The Inquirer, the online news site Rappler, Ateneo, University of the Philippines and De La Salle University were among the organizers of the forum, partnering with civil society groups.