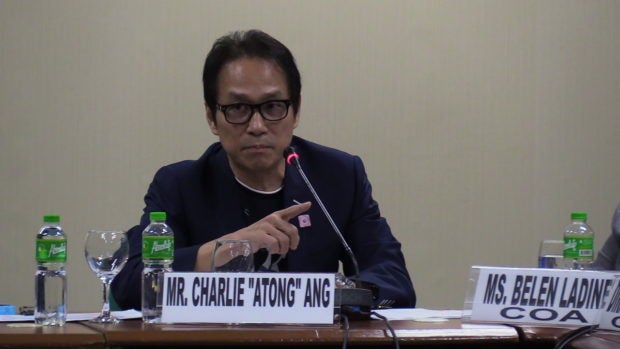 Ang, an alleged gambling lord, said at a Senate hearing on Monday that current STL operations were designed to fail.

He offered a solution to the problems plaguing STL—government takeover of STL operations and adoption of his “formula” that would enable the Philippine Charity Sweepstakes Office (PCSO) to earn more revenue.

“There is no end to the discussions on the problems of STL because it was designed to fail,” Ang said at the hearing of the Senate committee on games and amusement, presided over by Sen. Panfilo Lacson, on a bill to create the Philippine Charity Office.

Ang was addressing Lacson’s observation that despite several hearings on the matter, nothing seemed to be resolved.

Ang said there was no way to correct current STL operations because “the formula is wrong.”

The PCSO cannot really determine actual STL sales because gambling lords are allowed to operate it, he said.

STL was launched by the PCSO in the hopes of eradicating “jueteng,” an illegal numbers racket. But STL failed to eliminate jueteng because gambling lords used it as a front for the illegal numbers game. The two games have similar mechanics.

At a hearing last month, Lacson said the government was losing at least P4 billion a month or P48 billion a year to gambling lords operating STL outlets in Luzon.

The forgone revenue was a far cry from the P1.7 billion the PCSO collects monthly from authorized agent corporations.

Ang said at the hearing in January that he could guarantee the PCSO at least P60 billion in yearly revenue or P200 million daily if the agency took control of STL operations.

“How would you do that?” Lacson asked Ang on Monday.

Ang proposed that he be allowed to discuss “the formula” with the PCSO outside the hearing as there were some legal matters that needed to be threshed out.

In his proposal, gambling lords would no longer dictate the amount of sales they wanted to remit to the PCSO.