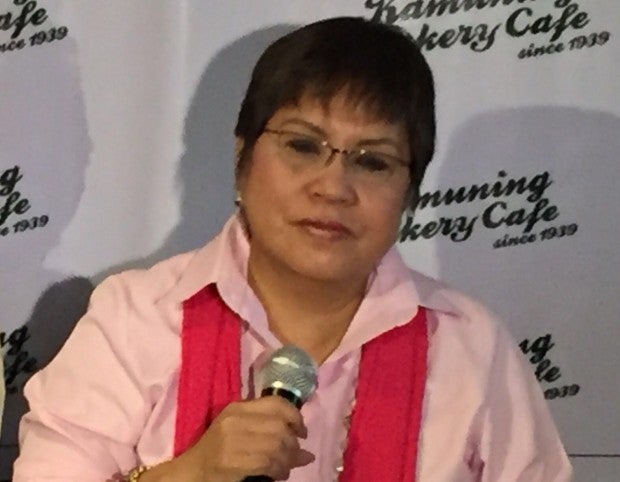 The lawyer of the estranged wife of former Commission on Elections (Comelec) chief Andres “Andy” Bautista fears that he would no longer return to the country amid the unexplained wealth allegations against him.

While the arrest order against Bautista for not showing up at the Senate probe was a “welcome development” for them, Patricia’s legal counsel, lawyer Lorna Kapunan said he might not return to the country as he could face plunder charges.

“Kung ikaw ay possible facing plunder because lumabas na yung evidence sa impeachment proceedings… the evidence is strong enough to impeach him, and with that evidence alone, certified by the justice committee of the House and the plenary, that is enough to convict him of plunder,” Kapunan told reporters.

“The warrant of arrest is a welcome development but I think he knows the consequence that if he comes here, there will be probable cause for plunder charges and that would be non-bailable, which leaves us to be concerned he might not come back,” she added.

Earlier, Senate committee on banks, financial institutions and currencies cited Bautista in contempt and ordered his arrest once he returns to the country.

Patricia said she was not aware of her ex-husband’s whereabouts since she last connected to him in November 2017.

She likewise appealed to Bautista to show-up and respect the Senate.

“Like everybody else we would like to know the truth about these documents and this is the best venue for that so as Senator Chiz said, you know out of respect to the Senate please appear, because that’s the least that you can do. Answer the questions that the people are asking,” Patricia told reporters.

Patricia had been accusing Bautista of allegedly amassing nearly P1-billion worth of unexplained wealth, and of owning more than 30 bank accounts with the Luzon Development Bank’s (LDB) amounting to P329 million. /cbb

Read Next
President Duterte slammed by writers, activists for ‘shoot in the vagina’ statement
EDITORS' PICK
CHR hopes inequalities exposed by COVID-19 pandemic are addressed
Smart offers wireless fiber-like speeds to Filipino homes with country’s first 5G Prepaid Home WiFi
This new condo in the South will make you want to turn a new leaf
Legarda: Ending Violence Against Women, a cause for all
DOH: Booster doses for fully vaxxed adults to start December 3
BOQ monitoring 64 travelers from ‘red-list’ countries amid Omicron
MOST READ
DOH: Booster doses for fully vaxxed adults to start December 3
Another disqualification petition filed against Bongbong Marcos
Ex-DOT chief Ace Durano convicted of graft over 2009 project
Roque defends Bongbong Marcos: ‘He was only 15 years old in 1972’
Don't miss out on the latest news and information.