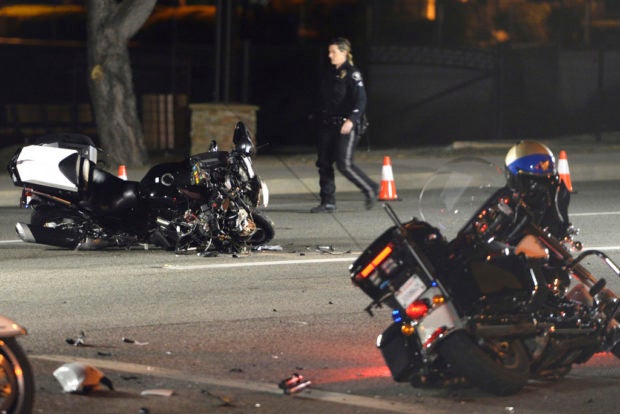 A police motorcycle (left) lies damaged along a road in Simi Valley, California, on Friday, Feb. 9, 2018. The motorcycle was escorting the motorcade of Canadian Prime Minister Justin Trudeau who was visiting the state. Trudeau’s vehicle was not involved and he was not hurt.  AP

The patrol officer, whose name has not been released, was hospitalized late Friday with “moderate” injuries, according to a tweet from the Ventura County Fire Department.

Trudeau had just left the Ronald Reagan Presidential Library in Simi Valley, near Los Angeles, after delivering a speech in defense of the North American Free Trade Agreement (NAFTA). He was not injured.

The passenger car driver and her son were taken to a hospital as a precautionary measure. The woman’s husband later told local television station KABC-TV that the son might have suffered a broken wrist.

The Canadian leader earlier visited Chicago and San Francisco on his three-day US swing, and was set to meet Saturday with Los Angeles Mayor Eric Garcetti, before returning to Ottawa.

In his Friday speech, Trudeau said the trade pact uniting the United States, Canada and Mexico needs improvements but had brought clear benefits to all.

The agreement has been the subject of arduous negotiations since President Donald Trump said the United States would abandon NAFTA unless Mexico and Canada offered major concessions. /cbb