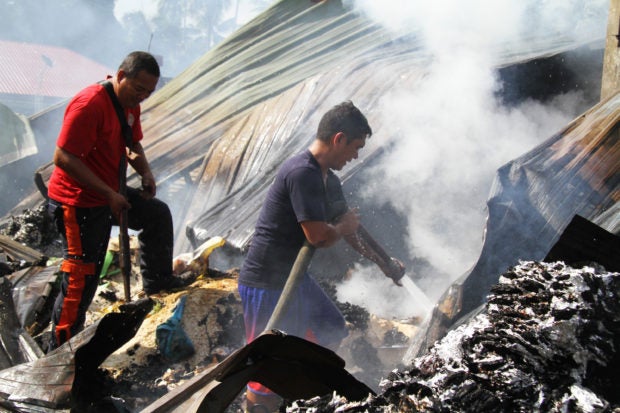 Firemen train their hoses at the rubbles of light materials and debris after the four-hour fire that destroyed the public market in Bacolod town in Lanao del Norte. The Bureau of Fire Protection declared fire out at 2:30 a.m. February 10. Photo by Richel V. Umel, Inquirer Mindanao

BACOLOD, Lanao del Norte–The public market here was razed on Friday evening by a four-hour fire that started around 10 p.m.

Senior Fire Officer Henry Baguio, the local fire ground officer commander, said their investigation showed that the fire could have been “electrically-triggered.”

“We are looking into an unattended rice cooker in one of the stalls (as the cause of the fire),” he told the Inquirer.

Fire Officer 2 Rommer Dela Cruz, the arson investigator, said the fire started in the middle portion of the P7-million market and quickly spread and engulfed stalls.

The fire was controlled after four hours with fire engines coming from various areas, he said.

Joey Espinosa, a witness, said the fire broke out amid a power outage. He believed it was not triggered by faulty electrical wiring as fire officials had theorized.

It could be that a candle lit by one of the stall owners started the fire, Espinosa said.

Mayor Joselito Miquibas said no injury was reported during the fire.