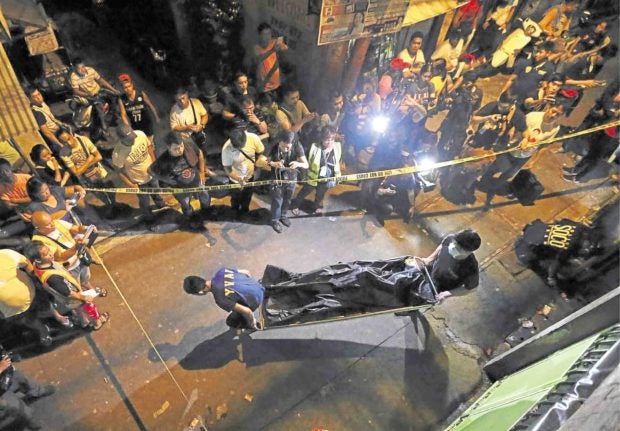 PNP deputy spokesperson Supt. Vimilee Madrid said those killed were from operations that started in December 5, 2017 – when the PNP started to support the PDEA – to February 8, 2018.

Madrid said those killed “most probably” resisted when they were being arrested by anti-narcotics operatives.

“We have 53 (drug suspects) who died in police operations,” Madrid said.

Of the 53 drug personalities killed, 31 were killed in drug buy-busts while 11 were killed in operations conducted by the PNP Regional Office 3 in Central Luzon, Madrid said.

“Most of those killed were in buy-bust operations,” she added in Filipino.

Madrid added that the other drug personalities were killed during the service of search warrants and in checkpoint operations such as “Oplan Sita.”

Meanwhile, Madrid said that since the PNP re-launched “Oplan Tokhang” on January 29, the campaign remained “bloodless” with no casualties being recorded over a two-week period.

Police units have arrested 6,253 drug personalities in 4,058 operations, according to Madrid.

According to Madrid, the PNP has implemented 3,456 “Tokhang” activities in 17 regions with 1,573 drug personalities surrendering nationwide.

There are total of 11,000 individuals in the drug watchlist of different police offices, Madrid said.

The PNP rejoined the fight in December to assist the PDEA which has a limited manpower and resources to conduct anti-drug operations.

“Tokhang,” a play on the Visayan words “katok” (knock) and “hangyo” (plead) refers to the house-to-house visits of police officers on the homes of suspected drug criminals to ask them to surrender.

It is now being implemented from 8 a.m. to 5 a.m. by four-man team of “Tokhangers,” or a group of policemen who are authorized and trained to conduct the campaign.

Tokhang operations, under the PNP’s new guidelines, should be joined by a representative from the barangay council, human rights group, or religious sector. Operatives are also not allowed to enter a suspect’s house.  /muf

Read Next
Customs fixer in P6.4B shabu shipment insists Manila City Jail unsafe for him
EDITORS' PICK
What to watch out for when selecting a video surveillance solution
DOH says COVID-19 cases plateauing, but public shouldn’t be ‘complacent’
House energy committee chair Arroyo bats for cheap electricity
Unleash the photographer in you this World Photography Day with vivo smartphones
23,000 cops to be deployed nationwide for school reopening
Look Through: The fate of impounded stray dogs
MOST READ
Sharon Cuneta asks for prayers for friend in ICU who suffered silent stroke
Light therapy could be the answer to your sleep problems
Korina Sanchez reunites with former ABS-CBN co-anchors Julius Babao, Cheryl Cosim
Solons file resolutions seeking probe on ABS-CBN, TV5 merger
Don't miss out on the latest news and information.