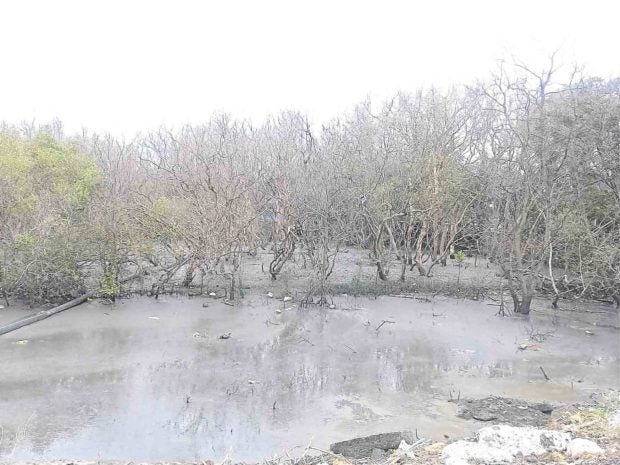 ILOILO CITY — Mangroves, aged 10 to 20 years, are continuously dying at a government esplanade project here despite assurances of different agencies that they will protect the trees.

Marine scientist and mangrove specialist Jurgenne Primavera lamented the “gradual but wholesale killing of mangroves” along the Iloilo River.

She said mangrove patches were being destroyed as materials dredged from the river were dumped into these areas, covering the mangroves’ roots.

The opening of the culverts were blocked by debris, preventing tidal flow to the mangroves, Primavera said.

The culverts are being built as part of the Iloilo River Esplanade project, which consists of a series of lateral parks put up on both sides of the river from Carpenter’s Bridge in Molo District to Barangay Nabitasan in La Paz District.

When completed, the P488-million esplanade will stretch 7.5 kilometers, with a width of 5 meters.

The completed sections of the lateral park have become a tourist destination and popular recreation area for residents and tourists.

But environmentalists have appealed to government agencies to prioritize the protection of the environment over development projects.

They stressed the importance of mangroves in coastal protection, including flood control and in carbon storage amid the worsening effects of climate change.

The Department of Environment and Natural Resources earlier assured it would ensure the protection of the mangroves after environmentalists protested the destruction of mangroves in the project site.

The Department of Public Works and Highways, which is implementing the project, had resorted to the earthballing of mangroves in some areas affected by the project. Earthballing involves the uprooting of trees and replanting them in other areas as an alternative to cutting.

But Primavera said earthballing was not an effective way to save the mangroves.

She asked agencies involved in the project to stop dumping dredged materials into the mangrove area and remove materials there to restore its original elevation.

Primavera said the culverts should be declogged to allow an unimpeded tidal flow.