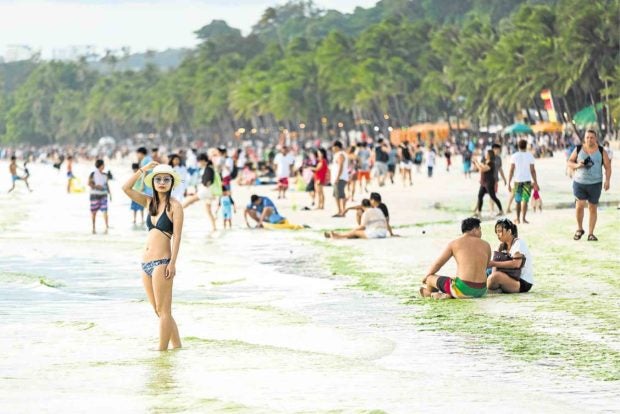 Despite its environmental and regulation problems, Boracay Island remains a popular hideaway for local and foreign visitors. INQUIRER FILE PHOTO

ILOILO CITY — The Department of Environment and Natural Resources (DENR) would issue notices to vacate buildings on Boracay Island in Aklan province that are in areas categorized as forest land.

Owners of the buildings, however, would be given a chance to acquire lease agreements from the DENR that would save the structures from demolition.

Jim Sampulna, DENR Western Visayas director, said he had been directed by Environment Secretary Roy Cimatu to issue the notices after an inventory of the structures had been completed.

Sampulna earlier said that at least 1,000 residential and other structures were on areas categorized as timberland.

These were in about 400 hectares of land not covered by titles issued by a court or by special land use permits and forest land use agreement for tourism purposes (FLAgT).

A FLAgT allows the temporary use, occupation and development of forest land for tourism purposes for a period of 25 years renewable for another 25 years.

It covers forest lands to be used for bathing, camp sites, ecotourism destinations, hotel sites and other tourism activity.

Under Presidential Proclamation No. 1064 issued by then President Gloria Macapagal-Arroyo on May 22, 2006, nearly 629 ha, or more than 60 percent, of the 1,032-ha island was classified as alienable and disposable and the rest as forest land and protected areas.

Only about a third of the island (292 ha), belonging to the heirs of Ciriaco Tirol, are titled, according to the DENR.

Most land claimants in Boracay pay tax declarations, many for more than 30 years, as proof of ownership or rights over properties.

Sampulna said issuing FLAgT for structures that would qualify as tourism facilities under Proclamation No. 1064 would minimize dislocation.

“It would be impossible to remove all the structures,” he said.

Informal settlers, though, would be relocated to mainland Malay town where a relocation site would be established especially for workers of hotels, restaurants, resorts and other businesses.

An estimated 50,000 residents, many of whom were workers, live in Boracay.

This had raised continuing calls to decongest the island.

Sampulna said since 2010, the carrying capacity of the island had already been surpassed based on DENR studies.