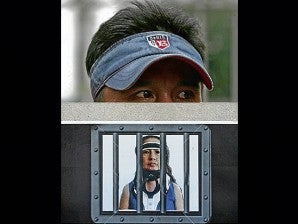 PROTEST POSTER. A militant group in wishful-thinking mode held up this poster of ex-President Gloria Macapagal-Arroyo behind bars during a rally outside the Supreme Court on Friday. Backing Leila de Lima, they called on the court to lift the TRO letting Arroyo leave the country. LYN RILLON

Seventeen months after stepping down from the presidency, Gloria Macapagal-Arroyo on Friday was served an arrest warrant for alleged electoral sabotage.

The Pampanga representative, once dubbed the “Iron Lady of Asia,” was in bed at a 16th-floor suite of St. Luke’s Medical Center in Taguig City, wearing a hospital gown and a neck brace. The serving of the warrant capped a day of swift and unexpected developments.

Senior Supt. James Bucayu of the Southern Police District (SPD) led a battery of policemen in black berets and blue uniforms in serving the warrant. He said Arroyo was calm and had anticipated their arrival, even offered them a smile, and waived her right to hear a reading of her rights by Senior Supt. Joel Coronel.

The warrant was served at 6:30 p.m., or two hours after it was issued by Judge Jesus Mupas of Pasay City Regional Trial Court Branch 112 for the nonbailable offense.

The officers were led from Arroyo’s room to the suite’s receiving area, where former fiscal Jose Flaminiano received the warrant and took over the details of the arrest.

“Under the direction of Police Director Alan Purisima, we have served the arrest warrant on former President Gloria Macapagal-Arroyo,” Bucayu said in an impromptu press conference held 20 minutes after officially putting the lawmaker, who has a bone ailment, under hospital arrest.

“She was conscious and in a reclining position on her bed when we served the warrant. It was very visible that she was sick. But she smiled at us. Perhaps she had expected us already,” he said. “She expected it; she was not sad. She looked like she just woke up. Not like [at the airport on Tuesday night], when she was nearly crushed. She was just nodding and smiling.”

Due to Arroyo’s frail condition, police will conduct the “booking”—the standard taking of mug shots and fingerprints—Saturday at 9 a.m. in her hospital room, Bucayu said.

“Depending on her condition, to be determined by government doctors, we will transfer [her] to the custody of the SPD on Monday,” he said, adding that four guards had been stationed outside Arroyo’s suite and another team at the main entrance of the hospital.

Arroyo is the second former Philippine president to be arrested, after Joseph Estrada in 2001. But unlike Estrada, who was eventually convicted of plunder, there were no supporters keeping vigil when she was arrested.

Shortly before the warrant was served, Ferdinand Topacio, lawyer of Arroyo’s husband, and Raul Lambino, Arroyo’s legal spokesperson, made themselves scarce to reporters.

Earlier in the day, the two men were defiant and optimistic, with Lambino announcing that the former President and her husband would leave for Singapore Friday afternoon.

“It’s a matter of exercising their constitutional right to travel,” he said.

Bucayu said anyone could visit Arroyo depending on the hospital rules.

He said the arresting team wanted to talk to Arroyo’s doctors but they were not in the suite. Only Arroyo’s husband, Jose Miguel “Mike” Arroyo, and their son, Camarines Sur Rep. Diosdado “Dato” Arroyo, were with the former President, along with Flaminiano, Lambino and Topacio, her spokesperson Elena Bautista-Horn, and some of her former Cabinet members and relatives.

There were no children in the suite, Bucayu said.

Senior Superintendent Coronel said that while Arroyo was not taken to jail, the important thing was that she was now under arrest.

He said Arroyo was not considered a flight risk or suicidal, which was why police had kept security at a minimum.

Judge Mupas ordered Arroyo’s arrest for purportedly engineering the results of the 2007 senatorial elections in Maguindanao.

He set aside the request of the Commission on Elections (Comelec) for the urgent issuance of a hold-departure order on Arroyo and her two coaccused and scheduled a hearing on the need for such an order on Monday at 9 a.m.

In a one-page order that Branch 112 Clerk of Court Joel Pelicano read to reporters, Mupas said that “after personally evaluating the voluminous records of the case,” he found probable cause against Arroyo, Ampatuan Sr. and Bedol.

The court based its finding of probable cause against Arroyo on the affidavits of Norie Unas, Ampatuan Sr.’s former senior aide; Zaldy Ampatuan, a son of Ampatuan Sr., and Bedol, which “point[ed] to the complicity of … Gloria Macapagal-Arroyo with the other accused.”

Prosecutor General Claro Arellano said Abalos was not included among those charged because the case that Comelec filed was concerning the alleged cheating in Manguindano during the 2007 election.

Arellano said a separate complaint for 11 counts of electoral sabotage would be filed against Arroyo, Abalos and several others on Monday.

While the Philippine judicial process has been perceived as moving painfully slow, the wheels of justice turned like a well-oiled machine on Friday.

Comelec lawyers brought the criminal information sheet to Clerk of Court Pelicano’s office at around 11:22 a.m. and the case was immediately raffled off electronically to Judge Mupas’ court.

As it turned out, the Pasay RTC was a pilot testing site for the Supreme Court’s enhanced case management program, where the raffle of cases and the generation of case numbers are done using computers.

The project, which was under the watch of retired Associate Justice Adolfo Azcuna, was also made available in Quezon City and the other cities of Makati, Marikina, Angeles (Pampanga) and Lapu-Lapu (Cebu), according to a poster on Branch 112’s office door.

Pelicano said Pasay City had jurisdiction over the case because the ballots were brought for counting at the Philippine International Convention Center (PICC).

Judge Mupas appeared at the courtroom at around 1 p.m. but refused to be interviewed. He allowed reporters to stay in the courtroom and office as he went through the records of the case, which consisted of at least eight black binders as thick as a copy of the telephone directory’s Yellow Pages.

At around 3 p.m. Mupas directed reporters to leave the courtroom—so he could “concentrate,” according to Pelicano. But as the directive was being announced, the Inquirer saw a member of the court staff holding a pad of yellow paper and appearing to be typing something.

The staff member gestured to a colleague to ask reporters to leave, saying:  “Baka may makabasa nito (Someone might read this).”

An hour later, Court Sheriff Ismael Cuerdo casually left the office holding pieces of paper. Asked where he was going and if he held the arrest warrant, he smiled and answered in the affirmative.

Cuerdo went to the Pasay City Police’s warrants section and had the arrest order received.

In the three-page rap sheet, Arroyo was accused of conspiring with Ampatuan Sr. and Bedol in “willfully, feloniously and unlawfully tamper[ing with] the provincial certificate of canvass (PCOC) of votes, the statements of votes by city or municipality (SOVM) and summary statement of votes (SSOV) for  the province of Maguindanao” in May 2007.

Arroyo allegedly ordered the rigging “during a dinner meeting in Malacañang” where she “personally instructed” Ampatuan Sr. to ensure a “12-0 victory for the senatorial candidates of Team Unity,” according to a copy of the document obtained by the Inquirer. Then Governor Ampatuan Sr. purportedly issued a similar instruction to Bedol.

The Comelec claimed that the order to commit fraud was carried out by Bedol, which resulted in the tampering of the PCOC, SOVM and SSOV and the padding of votes for the 12 Team Unity candidates.

The election documents were then submitted for canvassing to the Comelec, then sitting as the national board of canvassers at the PICC in Pasay City, the Comelec said.

In its urgent motion for the issuance of a hold-departure order on Arroyo, the Comelec said the former President was “insisting to leave the country allegedly to consult medical experts of her own choice and to receive specialized care and medical attention from other institutions due to her medical condition, which hardly qualifies as an emergency or life-threatening.”

The poll body claimed that “the insistence of the accused … to leave the country is being done for the purpose of absconding and thereby evading prosecution for their electoral sabotage case.”

It added: “Considering the gravity and magnitude of the offense committed, the damage and prejudice they caused to the electoral and democratic processes of the government, the imposable penalty involved, and the vast resources and international connections of the accused, there is a real danger that they will flee the country to avoid criminal prosecution.”

Following the filing of the case of electoral sabotage against Arroyo, the Department of Justice (DOJ) called on the Supreme Court to lift its TRO (temporary restraining order) on the travel ban on Arroyo and her husband.

In an urgent manifestation, Solicitor General Jose Anselmo Cadiz said the Pasig City RTC now had jurisdiction of the case.

“The filing of a complaint or information in court initiates a criminal action. The court thereby acquires jurisdiction over the case, which is the authority to hear and determine the case. The rule therefore in this jurisdiction is that once a complaint or information is filed in court, any disposition of the case such as its dismissal or the conviction or acquittal of the accused rests on the sound discretion of the court,” Cadiz said.

Earlier in the day, the Comelec voted 5-2 to approve the filing of a case of electoral sabotage against Arroyo.

Mike Arroyo was not named as a respondent in the case “for insufficiency of evidence to establish probable cause.”

The decision of the Comelec sitting in full session was made following deliberations early Friday, a few hours before the Supreme Court was to resolve questions on the TRO it issued on Tuesday on the inclusion of the former First Couple in the immigration watch list.

Commissioners Lucenito Tagle and Armando Velasco did not take part in the vote, claiming they had not received earlier a copy of the 33-page resolution issued by the joint panel of the DOJ and Comelec that looked into the allegations of poll fraud in 2007.

After a meeting that lasted nearly three hours, the Comelec en banc issued a four-page resolution stating that it was approving and adopting the joint panel’s resolution to file a case of electoral sabotage against Arroyo, but with a few modifications concerning other personalities investigated by the panel.

In its resolution, the Comelec ordered its law department to immediately file the necessary cases “in the higher interest of justice and by reason of manifest attempts to frustrate the government’s right to prosecute and to obtain speedy disposition of the present case pending before [it].”

In a concurring opinion, Brillantes said he was “originally inclined” to inhibit from the deliberations but decided to “vote and concur” with the opinion of the majority in the “higher interest of justice [and] equity and as public interest highly demands.”

He said probable cause against Arroyo was established “specifically on her failure to submit any refuting evidence to the direct statements under oath of witnesses.” With reports from Niña Calleja, Jocelyn R. Uy  and Jerome Aning