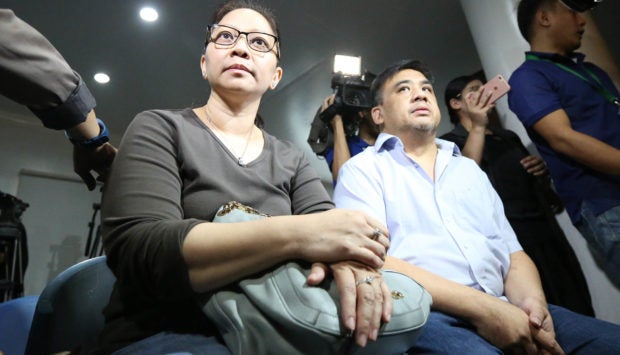 In a recent phone interview with the Inquirer, Carmina Castillo said UST had “never” reached out to her family since Atio died in September last year.

Last week, the Senate committee on public order and dangerous drugs that investigated Atio’s death released its report, recommending the disbarment of or disciplinary action against lawyer Nilo Divina, dean of the UST College of Law, and 18 other lawyers who belonged to the Aegis Juris fraternity for their roles in the fatal hazing of the law student.

Divina and other fraternity members denied any wrongdoing. But the committee headed by Sen. Panfilo Lacson refused to believe them.

The report also said that student witnesses might refuse to come out as long as Divina remained at his post in the university.

The committee also admonished UST for failing to implement the antihazing law. It urged the university to perpetually ban Aegis Juris.

The Inquirer has called UST’s public information office twice, each time being told the school was not ready to comment on the Senate inquiry’s findings.

Castillo said she found it perplexing that UST could take a stand on issues such as the firing of the university’s basketball coach yet be tight-lipped on the hazing death of her son.

“That’s just basketball. Is that more important than a crime committed by its students and faculty? We are talking about a crime because those who did this to my son are criminals. They are criminals,” she said.

Castillo also noted how the university swiftly distanced itself from the government service award that the UST Alumni Assocation gave to Assistant Communication Secretary Mocha Uson but couldn’t immediately make a stand on her son’s case.

When asked whether the university helped the investigation, Castillo said: “No, never.”

She said it was the Manila Police District that did all the hard work.

“The problem is not UST itself but the people who are running it,” she added.

Read Next
Colts: Linebacker Edwin Jackson among 2 killed on highway
EDITORS' PICK
Countries with confirmed cases of coronavirus
FlipTop rapper Loonie freed on bail
SM continues to send relief assistance to remote towns in Batangas
Get exciting deals and discounts when you download the new McDonald’s App
China expands lockdown against virus, fast-tracks hospital
‘A greener, cleaner tomorrow’: A how-to guide for Filipinos who want to help with today’s energy crisis
MOST READ
Megan Young, Mikael Daez get married
Taal’s sulfur dioxide emission increases
No time for revelry; Tagaytay instead plans for alert level 5
Body parts found in suitcase in Bulacan
Don't miss out on the latest news and information.