Man behind ‘Humans of New York’ to feature Manila 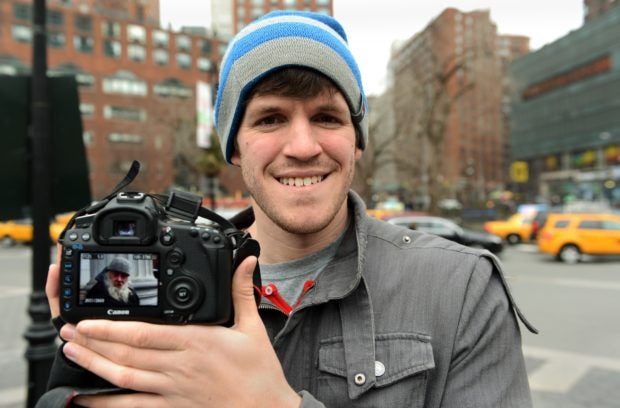 Brandon Stanton (L), creator of the Humans of New York blog, shows an image he took of a man named Carl February 22, 2013 across the street from Union Square in New York. AFP

For the man behind the popular storytelling project, “Humans of New York,”  the stories of people he has met all over the world are linked by the common thread of  joy, triumph and despair,  no matter the culture and religion.

Soon, the stories of Filipinos, who are among his biggest followers on Facebook, will be  featured in his next book, said Brandon Stanton.

The bestselling author and photographer briefly visited the country this week to do what he claimed to do best: Stop random people in the street and encourage them to wear their heart on their sleeves.

With only a week to do his work, Stanton roamed the streets of Metro Manila armed only with his trusty camera and a feel for good stories.

Along with a local interpreter, he trudged the city from Luneta to Baywalk in Roxas Boulevard, and from Malate to Quezon Memorial Circle.

“What amazes me is how much the stories of people here are similar to those of others around the world,” Stanton said.  “We all want our children to be educated, we want security, we want happiness,” he added.

“Culture does have a big impact on people’s behavior, but the biggest surprise is that no matter what culture I’m in, no matter what religion [they belong to], no matter what words they speak, when I sit down and start talking to people through an interpreter, it all starts to feel a little simpler,” the photographer said during a visit to the  University of the Philippines Diliman where he shared his journey with some 800 eager fans.

Stanton was in finance before he decided to follow his passion for photography in 2010.  His “Humans of New York” project was, however, different from his initial vision.

Stepping into the Big Apple with barely enough money and very little knowledge about photography, he initially wanted to take photos of 10,000 New Yorkers and create an extensive catalogue of the city’s residents.

But a photo he took of two boys — an African-American and an Asian — with their mothers on the subway became a turning point in his project.  “It wasn’t because of the focus or composition [of the photo], but because I have gotten over my fear of interacting with strangers,” he said.

Since then, Stanton has been taking shots of people from New York and other countries, at the same time collecting stories that are whimsical, heartbreaking, strange and hopeful.

The subjects of his photos range from Syrian refugees to children with pediatric cancer, as well as Central Park habitués to former US President Barack Obama.

Eight years since he posted his first photo, Stanton has attracted over 18 million followers who eagerly await his latest posts on Facebook. At least 7 million others follow his updates on Instagram. He has also published three books based on his work which are sold globally.

“When people recount their stories, pretty much everybody sees something they can relate to,” he said of his success. “I think these stories in themselves are the quickest and easiest way to see yourself in another human being, even if that other person has a different religion or lives in a different country, or is part of a group often seen as an enemy.”

The stories of Filipinos Stanton had conversed with on the streets of Metro Manila will soon be posted online.

The photographer has one advice to those aspiring to follow in his footsteps: “Don’t wait for the golden idea before you go and do what you love every day.”