Dive turns into story of survival, grit over panic 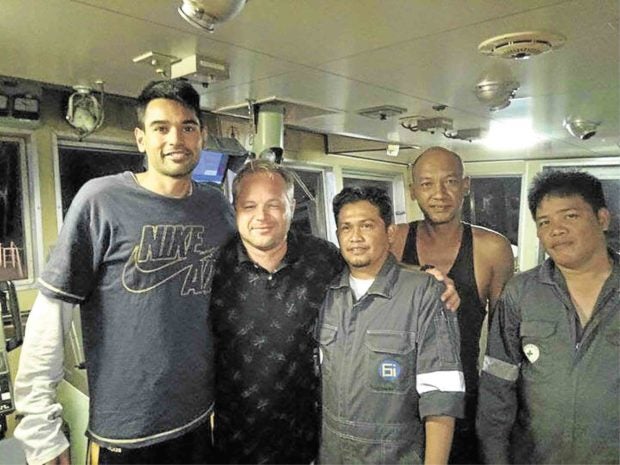 DUMAGUETE CITY—What started out as an ordinary scuba diving trip last Monday in the internationally renowned Apo Island in southern Negros Oriental turned out to be one that instructor Matthew LaFrance and his student, Swayam Rawal, would forever remember.

“It was a normal day,” LaFrance recalled. “We had a couple of dives and some lunch to prepare us for our third dive,” he said.

Rock Point West, the third dive site, is not your ordinary dive site, as many divers have been known to have been swept away by strong currents there.

“When I do that dive, I usually drift out and get picked up,” LaFrance said.

This wasn’t the first time for LaFrance, 41, who knew almost everyone on the boat that took them to Apo. He, after all, had been a resident of Dauin town for over two years now.

LaFrance left his desk job in Toronto to become a dive instructor in Negros Oriental. He and his wife, Irene, have two kids, and the third one is due in a month.

Rawal, 30, a US citizen, came to the Philippines to learn scuba diving.

The two hit the water and went down at 1:08 p.m. Some 35 minutes into the dive, LaFrance could see that the current had brought them to the southern end of the island.

“I knew we were going fast so I sent up my signal marker buoy so the boat could see how quickly we were moving so they could watch us and follow,” he said.

They surfaced 11 minutes later to complete the 46-minute dive, far away from their boat.

“No big deal, it’s always the way it is—we wait there a bit and wait for the boat to get organized so they could come and get you,” he said to himself.

While he and his buddy could see the boat, they found themselves between the boat and the afternoon sun, making it difficult for the boatmen to see them.

They waited for a little while, blowing their whistle to draw attention as they continued to drift farther out. By this time, Rawal inflated his signal marker buoy, which LaFrance had given him earlier in case that they got separated during the dive.

“So we got two signal markers up and blowing the whistle and yelling and waving,” Rawal said.

Back in the boat, the boat crew and the other passengers of the MB Rosefel 2 started to worry.

A passenger onboard the Rosefel 2, who identified himself as Patrick Reyes, posted a comment in an online newspaper article, saying they were waiting for them to resurface and were looking for their emergency floaters. “Some divers went down to look for them,” he said.

After waiting for an hour on the surface, LaFrance and Rawal saw the boat move. “Oh, finally, they’re coming!” LaFrance said.

“What are they doing? They’re looking in the wrong spot! I told them I was going to drift and I said pick us up out there!” I even made a joke about it by saying ‘Come and get us or we’re going to end up in Mindanao!’”

Two hours passed and the boat passengers and crew couldn’t find the divers, leading them to suspect that the two were swept by the underwater current.

“We looked for them and we informed the Coast Guard. They couldn’t be found in the area where they were supposed to resurface. They drifted far, along the nautical route going to Siquijor,” Reyes said.

After a 2-hour search, the Rosefel 2 headed back for the island.

LaFrance said that due to the strong current, they couldn’t swim back to Apo Island but had to try and swim toward the big island, Negros Oriental.

They dropped their weight belts and tethered themselves together to avoid being separated before heading north.

LaFrance and Rawal found themselves in total darkness. “I tell you, watching the sunset in that situation—it’s a beautiful sunset—but boy, it is a horrible feeling watching the light go away,” said LaFrance.

While swimming, LaFrance and Rawal tried to keep each other sane and calm.

It was starting to get cold but they managed to stave it off between the kicking and exercising, and the adrenalin. But it started to get really cold by 8:30 p.m.

Thirty minutes later, LaFrance saw the lights heading their way. They could also hear the sound of engine running, indicating the vessel was near.

MV Fortune Gold, a 74-meter cargo vessel, was passing south of Negros Oriental on its way to Iloilo from Iligan City.

“We started making lots of noise—lots of noise! And the boat went by us. At that point, I said, ‘We’re screwed!’” said LaFrance.

But Rawal kept yelling until they saw the boat turning and the spotlight came on.

“We were yelling,  ‘yeeeeaaaaahhhhh!’ and we swam so hard for that boat. I never had that much energy in my life. The adrenalin was just wicked pumping!” LaFrance said.

They got into the boat and were given water. Since MV Fortune Gold had internet access, he was able to contact some people to inform them they had been rescued.

He gave the divers dry clothes, noodles and a place to sleep, until they got to Dumaguete Port around 2:45 a.m. of Jan. 30.

The incident has not scared LaFrance from scuba diving. “I’ve got kids so I’m not thinking about retirement. I’ve got to put them through school!” he said. “But we’re back—back from the dead!”