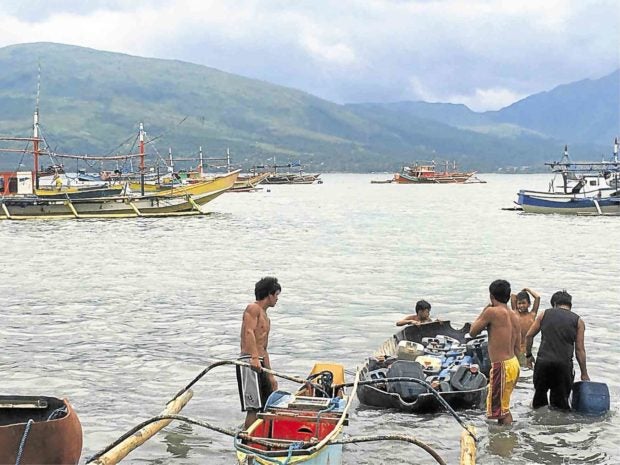 Boats are docked in Subic, Zambales, as their owners await good weather to set out to a fishing area that has shrunk after the Chinese Coast Guard started guarding Panatag Shoal. —ALLAN MACATUNO

SUBIC—Fewer fishermen from the province of Zambales dare venture out into Panatag (Scarborough) Shoal, which is now being guarded by Chinese Coast Guard vessels, for fear that tension over conflicting territorial claims in the area could flare up again.

The fishermen were staying away from the shoal, a rich fishing ground, despite improved relationships with China ushered in by the Duterte administration’s policy to put aside territorial disputes with China in its bid to distance itself from the United States, a longtime Philippine ally, and cozy up to the Asian giant.

“Filipino fishermen are free to go near the shoal but their number has gone down perhaps due to fear that tension may arise anew,” said Laureano Artagame, head of the municipal fishing vessel registry unit here.

Instead of returning to the shoal, known here as Panatag or Bajo de Masinloc, several fishermen turn to the “payao” (artificial reefs) that local and national agencies had put up as alternative fishing grounds, Artagame said.

“In the past, about 40 fishermen from Subic would venture into the shoal, but now only about eight of them are staying near the shoal that is tightly guarded by Chinese Coast Guards,” he said.

Panatag Shoal is located 230 kilometers from Masinloc town in Zambales province, which is within the Philippines’ 370-km exclusive economic zone.

Nelson Bien, chief of fisheries management and regulatory enforcement division of the Bureau of Fisheries and Aquatic Resources (BFAR) in Central Luzon, said his office had received reports last December that Filipino fishermen and Chinese Coast Guards had been trading food.

“The Chinese would give the fishermen rice in exchange for fish,” Bien said.

Nine Chinese Coast Guard ships were sighted at the shoal on Wednesday when the Northern Luzon Command (Nolcom) of the Armed Forces of the Philippines dispatched its newly acquired fixed-wing aircraft to patrol the disputed waters.

The deployment of the C-90 plane to monitor the area in the shoal, located in the West Philippine Sea, will be its first military mission under the Nolcom.

Read Next
10 athletes, coaches affected by fumes in Koronadal fire are now out of danger
EDITORS' PICK
Kai Sotto continues to inspire Filipinos by sharing his passions and stories with Smart Prepaid
1Sambayan to nominees: Stick to word of honor
Alex Eala wins Grand Slam on Independence Day: ‘I hope I made my contribution to the country’
Ahead of ONE: Full Blast II, Mongkolpetch warns Elias Mahmoudi: ‘Watch out for my fists’
Trust Robredo’s political instincts – Kaya Natin! convener
EDITORIAL: Good news, bad news
MOST READ
China cautions G7: ‘small’ groups don’t rule the world
1Sambayan to nominees: Stick to word of honor
Leni vs. Sara
Inday Sara to VP Leni: Keep off Davao City’s COVID-19 situation
Don't miss out on the latest news and information.