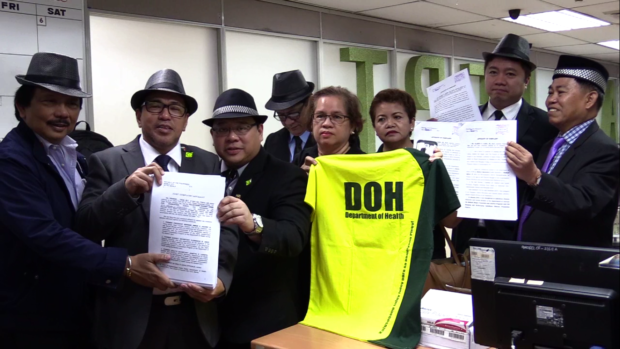 A complaint for violation of the Omnibus Election Code was lodged on Friday with the Commission on Elections (Comelec) by the Volunteers Against Crime and Corruption (VACC) against former President Benigno “Noynoy” Aquino III and other former government officials over the Dengvaxia fiasco.

In a nine-page joint complaint-affidavit filed on Friday, Dr. Francis Cruz and the Volunteers Against Crime and Corruption (VACC) said P3.5 billion in public funds were released to procure the Dengvaxia vaccine forty-five days before the May 2016 national elections.

According to the complainant, this was a violation of Section 261 (v) of B.P. Blg. 881, or the Omnibus Election Code.

“Aquino III, Abad and Garin had caused the releases, disbursements or expenditures of over Three billion five hundred thousand pesos in public funds in connection with the procurement of the Dengvaxia vaccine and implementation of the School-Based Immunization of Tetravalent Dengue Vaccine of the Department of Health,” the complaint stated.

“The said humongous public funds were used for any election campaign or for any partisan political activity, as no less than Aquino III, the leader of the Liberal Party, together with some DOH officials, took part during the launching of the Dengue Immunization Program of the DOH in order to further the candidacies of his partymates,” it added.

The complainants cited the investigation conducted by the Senate Blue Ribbon Committee jointly with the committees on health, and demography and finance in their affidavit.

They said the dengue immunization program covered three rounds which started in April, May and June 2016 and were supposed to end the same months in 2017.

A total of 830,000 children received doses of the Dengvaxia vaccine, the complainants noted. Some members of the Philippine National Police (PNP) were also administered with the vaccine, they added.

“The vaccine targeted all Grade 4 students aged 9 and above in three sets of doses particularly in all public schools of Regions 3, 4-A and NCR,” the complaint stated.

However, the manufacturer of Dengvaxia, Sanofi Pasteur, issued a statement on November saying the vaccine should only be administered to children who already contracted dengue, aged nine and above.

“In these lights, it behooves the (Comelec) Law Department to evaluate this joint complaint-affidavit and to file the formal charges against the respondents as well as to order the conduct of preliminary investigation,” the complaint stated.

The complainants also sought the recommendation to the Commission en banc, after proper proceedings, to file appropriate charges against the respondents with the proper court.  /muf