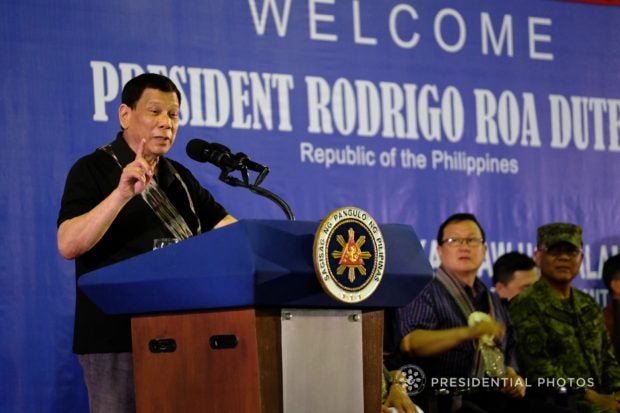 President Rodrigo Roa Duterte, in his speech during the Indigenous Peoples (IPs) Leaders’ Summit at the Naval Station Felix Apolinario in Panacan, Davao City on February 1, 2018, reiterates that he is willing to step down from the presidency as soon as the country’s shift to a federal form of government is fulfilled. KIWI BULACLAC/PRESIDENTIAL PHOTO

Despite President Rodrigo Duterte’s threat to kick out University of the Philippines (UP) students who continue to hold protests, a militant youth party-list said the administration could still expect more class walkouts to denounce the Chief Executive’s “dictatorship.”

“His statement exposes the true nature of his ‘free education’ scam: not all will benefit; instead of guaranteeing the right of every child to education, he dangles it around every time there is opposition to his fanatical dictatorship,” Kabataan Party-list Rep. Sarah Elago said in a statement on Friday.

“As if education is free in UP and other state universities; many students continue to suffer from skyrocketing costs of tuition and other school fees, causing growing discontent and rage among the youth.”

“On February 23, expect even more students to walk out of their classes to fight Duterte’s dictatorship and tyrannical attacks on the youth and the people,” she also said.

On Thursday, Duterte threatened to replace protesting UP students with those from the Lumad community in Mindanao.

The Chief Executive’s reaction came after several students of UP Diliman walked out of their classes to participate in the National Day of Walkout Against Tyranny and Dictatorship held also on Thursday.

“Earlier today, they walked out. Go ahead. If you don’t want to go to school, get out of there because I will bring (indigenous) students who are bright and put them there. A lot of Filipinos want to have an excellent education,” Duterte had said.

Elago said Duterte’s “knee-jerk reaction” only showed that the youth has successfully registered their indignation against his “anti-people policies and increasing fascist inclination.”

“Duterte can only shake at the growing resistance to his attacks on the youth,” she noted. /kga