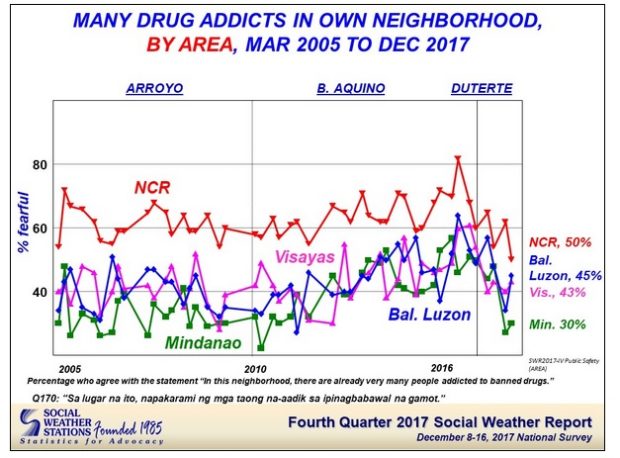 The number of drug addicts in villages across the country increased even as Metro Manila residents think the quantity of drug addicts in their communities has diminished, a nationwide survey taken in the last quarter of 2017 revealed.

The Social Weather Stations (SWS) survey released on Friday showed that families in Luzon, Visayas, and Mindanao believed that “presence of drug addicts in their neighborhoods” has become greater than before.

In Luzon, the survey gathered that drug addicts rose by 11 percentage points to 45 percent in December 2017 from 34 percent in September 2017.

In Visayas, the survey recorded that presence of addicts rose by three percentage points to 43 percent in December 2017 from 40 percent in September 2017.

In Mindanao, the survey revealed that the number of drug addicts rose also by three percentage points to 30 percent in December 2017 from 27 percent in September 2017.

But the SWS likewise noted that annual averages for both regions were at 41.5 percent in Visayas, and 37.3 percent in Mindanao for 2017 – way below recorded averages for the regions in 2016, which was at 56 percent (Visayas) and 51 percent (Mindanao).

Meanwhile, families in Metro Manila think the presence of drug addicts in their communities decreased. The survey said the rate fell by 12 percentage points to 50 percent in December 2017 from 62 percent in September 2017.

This brought the 2017 average presence of drug addicts in Metro Manila to a record-low 57.8 percent, according to the SWS.

No attribution, however, was indicated by the SWS as to why the interviewed adults think there were more or less drug addicts in their communities.