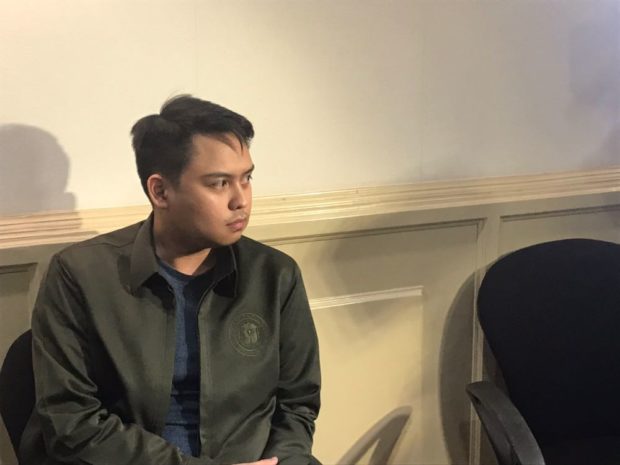 Customs broker Mark Ruben Taguba at the NBI. He is one of the subject of a warrant of arrest for the importation of P6.4B shabu in 2017. Photo by Tetch Torres-Tupas / INQUIRER.net

For Mark Ruben Taguba II, the 26-year-old Customs fixer tagged in the P6.4 billion shabu shipment, the release of arrest warrant against him might be swift but it was not surprising.

“Prepared naman. Inasahan ko na mangyayari to e (I’m prepared. I was expecting this would happen),” Taguba told Inquirer when asked about the warrant.

The National Bureau of Investigation (NBI) arrested Taguba on Wednesday night at the Senate of the Philippines in Pasay City by virtue of the warrant issued by Judge Rainelda Estacio-Montesa of Manila Regional Trial Court Branch 46 on Wednesday.

Taguba and eight others were facing a non-bailable case for importation of shabu, which the Department of Justice filed before the court last week.

Lawyer Dennis Siyhian, chief of NBI’s anti organized crime division, said upon learning about the warrant, the bureau agents went to the Senate, where Taguba was placed under protective custody for information he divulged about the shabu shipment.

Taguba also divulged the corruption at the Bureau of Customs that involved presidential son and son-in-law Paolo Duterte and Maneses Carpio.

One of the things Taguba immediately did was to pacify his parents. He said his father was “incensed” over his arrest while his mother was “sad.”