Duterte threatens to kick out protesting UP students | Inquirer News

Duterte threatens to kick out protesting UP students 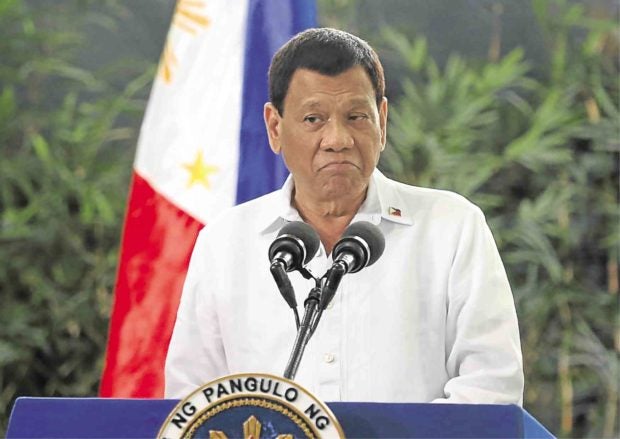 President Rodrigo Duterte on Thursday threatened to kick out University of the Philippines (UP) students who continue to hold protest actions against his administration and replace them students from the lumad or cultural minorities from Mindanao.

Duterte’s reaction came after several students of UP Diliman walked out of their classes to participate in the National Day of Walkout Against Tyranny and Dictatorship that was organized by progressive groups.

“UP…they want to walk out. You do not go to school anymore. That’s the people’s money. I’d be happy to reconfigure the view there,” Duterte said in a speech in Davao City.

He noted that UP students frequently walked out of their classes although government was subsidizing their education.

“Earlier today, they walked out. Go ahead. If you don’t want to go to school, get out of there because I will bring (indigenous) students who are bright and put them there,” the President said.

“A lot of Filipinos want to have an excellent education,” he added.

Duterte said he would give protesting UP students the “privilege” of not going to school for one year.

“So those who frequently demonstrate and walk out of their classrooms, I will give you the privilege of one year of not going to school,” Duterte said.

“I will let in those Filipino who were not able to get a chance to have an excellent education. It’s free there,” he said.

The President said he would also encourage lumad students “who are good in Math” to join the Philippine Military Academy.

He also offered lumad students the opportunity to study in prestigious but expensive schools like the Ateneo De Manila University and De La Salle University at the expense of the government.

Some UP students walked out of their classrooms yesterday and called on the public to “fight the dictatorship of Duterte.”

Duterte vows free education for all