newsinfo / World
World
RESPONSE TO STATE OF THE UNION SPEECH

Kennedy on Trump: Bullies may land punch but don’t win 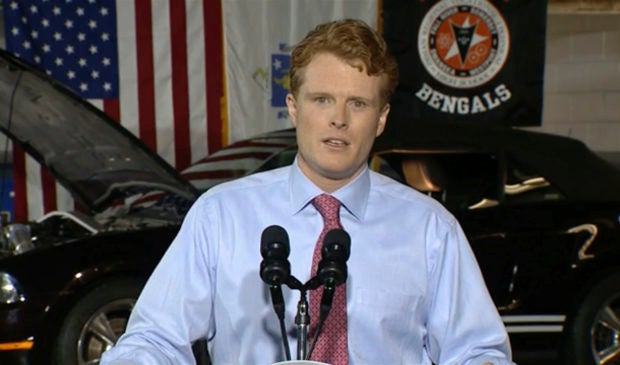 In this still image taken from video, Rep. Joe Kennedy III delivers the Democratic response to President Donald Trump’s State of the Union, at Diman Regional Vocational Technical High School in Fall River, Mass., Tuesday, Jan. 30, 2018. Kennedy, 37, a three-term congressman and grandson of former Attorney General Robert F. Kennedy, outlined a Democratic vision that he said promises a “better deal for all who call this country home.” (US NETWORK via AP, Pool)

WASHINGTON — Soaring stock prices under President Donald Trump have boosted investor portfolios and corporate profits, but they have not eased the economic anxieties of middle-class families, Massachusetts Rep. Joe Kennedy III said on Tuesday night in the Democratic response to Trump’s first State of the Union address.

In calling on Americans to reject the “chaos” of the Trump era, Kennedy also outlined a Democratic vision that promised a “better deal for all who call this country home.”

“We choose pensions that are solvent, trade pacts that are fair, roads and bridges that won’t rust away, and good education you can afford,” he said in a speech from a vocational high school in Fall River, Massachusetts, a onetime manufacturing hub that is now struggling with high unemployment and other problems.

Kennedy, 37, a three-term congressman and grandson of former Attorney General Robert F. Kennedy, has argued that Democrats should focus on the economic concerns of working-class voters who bolted the party in the 2016 elections.

Fall River, home to many blue-collar workers, “has faced its share of storms,” Kennedy said. “But people here are tough. They fight for each other. They pull for their city.”

In an apparent reference to Trump, he said “bullies may land a punch” and leave a mark but that they had “never managed to match the strength and spirit of a people united in defense of their future.”

In a hard-hitting speech for a political newcomer, Kennedy decried a rollback of civil rights protections, noting proposals that target Muslims, transgender people and others.

The Trump administration “isn’t just targeting the laws that protect us—they are targeting the very idea that we are all worthy of protection,” he said.

The red-haired Kennedy was elected to the House in 2012, returning the family to Congress two years after the retirement of Rhode Island Rep. Patrick Kennedy, the son of Joe Kennedy III’s great-uncle Ted.

In a nod to “Dreamers,” the 700,000 young immigrants brought here as children and now here illegally, Kennedy spoke in Spanish as he said Dreamers were a part of America’s story and promised that Democrats would not walk away from them.

A former Peace Corps volunteer, Kennedy was an assistant district attorney in two Massachusetts districts before being elected to Congress.

He has focused on economic and social justice in Congress and has advocated on behalf of vocational schools and community colleges, and championed issues such as transgender rights and marriage equality.