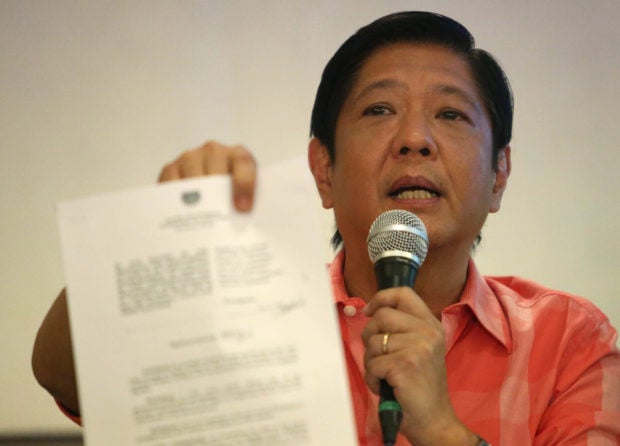 In a press conference on Monday, Jan. 29, 2018, former Sen. Ferdinand “Bongbong” Marcos showed alleged irregularities, mainly a square box places next to Vice President Leni Robredo’s name on an official ballot box, which his camp presented as evidence that the Comelec and Smartmatic made massive fraud and cheating in the May 2016 elections. (Photo by MARIANNE BERMUDEZ / Philippine Daily Inquirer)

The camp of former Sen. Ferdinand “Bongbong” Marcos Jr. on Wednesday claimed that its evidence on vote manipulation in the 2016 national elections came from the Presidential Electoral Tribunal (PET).

Lawyer Victor Rodriguez, spokesman for Marcos, said that Vice President Leni Robredo, through her counsel, lawyer Romulo Macalintal, “dishonored” the PET for accusing them of “tampering the evidence.”

“Mrs. Leni Robredo is still at a loss on how to counter the damning evidence presented by former Sen. Bongbong Marcos that she has now, thru counsel, accused the former Senator of tampering the evidence,” Rodriguez said in a statement.

“Her accusation though is tantamount to dishonoring the PET because it is the source of the soft copies of all the ballot images we presented. I call on Mrs. Robredo not to disrespect the Tribunal with a desperate claim,” the spokesman said.

In a press conference on Monday, Jan. 29, Marcos showed allegedly tampered ballots as he accused Robredo, Smartmatic and the Commission on Elections (Comelec) of conspiring against him.

Marcos said the ballots‘ oval-shaped spots, where voters were required to shade to indicate their chosen candidate, disappeared and were replaced by “mysterious squares,” which appeared to be marks that the vote counting machines recognized.

However, Macalintal said the evidence presented by Marcos was “fabricated.” He did not categorically say Marcos’ camp “tampered” with the evidence.

“Since the time of election and up to the present, not a single poll watcher from among the hundreds upon hundreds of Marcos’ watchers has ever come up to confirm Marcos’ excited and fantastic claim of poll fraud,” Macalintal said a day after Marcos’s press conference.

“This only confirms the fabricated character of these alleged ‘hundreds upon hundreds’ of ballot images that do not conform with the authentic ballot images,” Robredo’s counsel added.

Moreover, Macalintal said Marcos “should be investigated by the Comelec and or the PET to determine the source of such highly documents.”

But for Rodriguez, Robredo and her counsel should instead answer their “expose,” which showed “clearly how the election system was manipulated and robbed the Filipino people of their true will and mandate.” /atm