Visiting Basilan: A tale of a tourist or terrorist? | Inquirer News

Visiting Basilan: A tale of a tourist or terrorist? 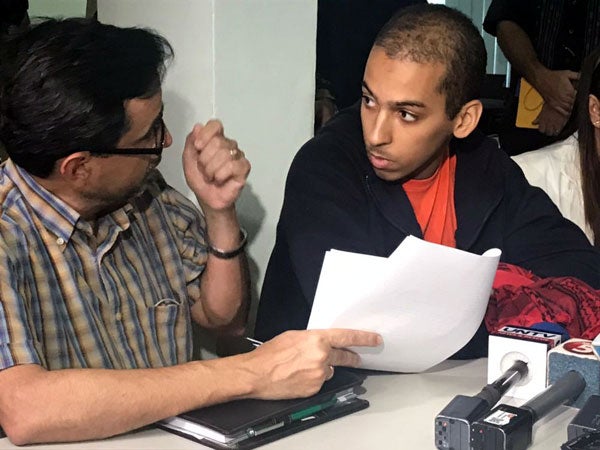 An interpreter from the Spanish embassy explains the contents of the counter affidavit to Abdelhakim Labidi Adib, a Spanish national of Tusian descent arrested in Basilan. INQUIRER.net / Tetch Torres-Tupas

A journey to find great adventure and a relationship with a “happily-ever-after” ending did not seem to go well for this tourist who seemingly taken to an unexpected detour—a military jail and a criminal case for violation of illegal possession of explosives.

For Abdelhakim Labidi Adib, a Spanish national with Tunisian descent, he went to the Philippines as a simple tourist looking for places to visit and find a woman he can spend his life with.

But according to members of the Philippine Army, Adib was arrested for aiding terrorism in Mindanao particularly Basilan.

Adib was intercepted on Jan. 22, at a military checkpoint in Basilan. Soldiers said he was accompanied by an Abu Sayyaf member who is one of the military’s targets. However, the companion of Adib abandoned him and escaped by jumping off a cliff, leaving him in the military custody.

Armed Forces personnel said there could be more of him than just a simple tourist. Adib is now tagged as a foreign terrorist aiding local terror groups in the south.

Seized in his possession were several explosives including a hand grenade, rifle grenade, detonating devices and blasting caps.

The 20-year-old Adib said in his counter-affidavit that: “I went here in the Philippines as a tourist. I have no intention whatever to aid anyone in any terrorist activity especially in causing trouble to the community.”

He said he was born in Spain to responsible and loving parents.

“My parents taught me so many traits especially in dealing with people around, in giving due respect as regards the practice of faith, religion and others.”

After schooling, he said he moved to Switzerland where he worked and saved money because it was his dream to travel to a faraway country. He said he chose Philippines because he heard a lot of “good reviews” in the country.

“I began thinking about going to the Philippines when I heard so many good reviews and feedback about the country that it is a [good tourist destination] with beautiful islands and scenery and above all, splendid people who are very accommodating and hospitable,” he said.

“I did not stop thinking about the delicious food which is hard to refuse. I imagine that it is possible to have a happy life, filled with good times and happiness and devoid of many problems,” Adib added.

“Another reason, which at the beginning I did not think too important, was to find a good woman to complete my happiness and [spend the rest of] my life with her,” he added.

As a starting point, he said he searched for the first city that he would visit and the most recommended was Davao City.

When he arrived last Oct. 10, 2017, he said he went from Manila to Davao where he visited several attractions before proceeding to Cagayan De Oro (CDO). In CDO, He said he met a certain Abuzaid who claimed to be part of the Yakan tribe. He said he offered to take him to his tribe and introduce him to its culture.

From CDO, he said they proceeded to Zamboanga and eventually to Basilan to visit the Yakan tribe. While in Basilan, he said the three weeks he spent with the tribe was “not a happy experience.”

“There is no food, no shower, no electricity, no proper shelter and it was not a comfortable stay,” he said adding that he was afraid especially after the group showed him photos of dead people.

“I decided to go home. I really regret my decision in going to Basilan. Nobody explained to me that Basilan is a dangerous place,” he said. Before he was allowed to leave, he said the tribe members took his money about 1,000 Swiss francs, mobile phone and some of his personal belongings.

He said he was escorted to Isabela City, Basilan on Jan. 19 where he was arrested by armed men.

He said, contrary to the military’s claim, he was arrested on the 20th not on the 22nd of January.

The Department of Justice (DOJ) already submitted the case for resolution. /jpv