MRT exec offers to resign after getting scolded by House members 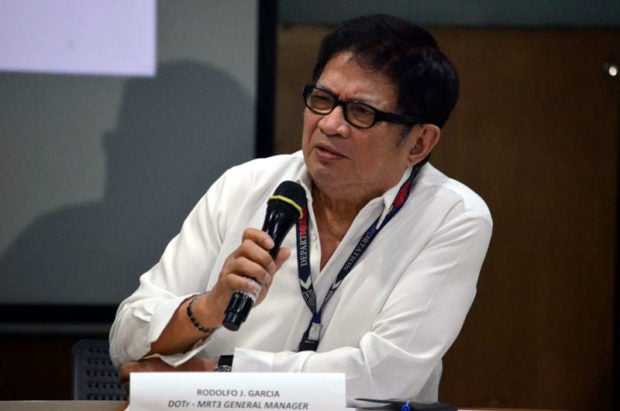 Metro Rail Transit Line 3 (MRT3) General Manager Rodolfo Garcia has offered to resign after House lawmakers grilled him on the worsening problems in the MRT system.

During a House committee on transportation hearing on Wednesday, Garcia, a retired police official, made the offer to step down from his post.

Garcia got a scolding from Speaker Pantaleon Alvarez, citing the frequent breakdowns of trains, thus causing long queues and overcrowding of passengers.

Garcia then suggested that they were considering increasing the number of MRT3 coaches by using the new Dalian coaches, which were found to be incompatible with the present signaling system.

Alvarez then asked Garcia if he was sure of what he was telling the committee.

“Then, I will resign kung hindi ako sigurado (if I am not sure),” Garcia said.

This prompted committee members to ask Garcia to accord the panel respect, with Majority Floor Leader Rodolfo Fariñas saying that the committee could order his detention.

Garcia apologized to the lawmakers.

Later in the hearing, Alvarez asked Garcia if he was serious in his offer to resign.

“Yes, your honor. Medyo pressured na po ako (I am quite pressured) as GM. I’m contemplating getting out,” Garcia said.