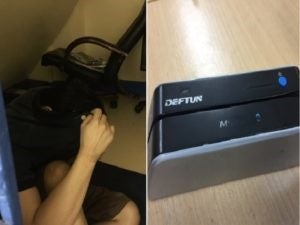 The skimming device used by Chen Lehom in withdrawing more than P100,000 from a bank ATM in Manila. (Radyo Iquirer/ Mark Makalalad)

A Malaysian national was arrested in Manila after he was caught making unauthorized withdrawals from a bank’s automated teller machine (ATM) using a skimming device.

In a Radyo Inquirer 990 AM report, police apprehended Chen Lehom, 34, along Adriatico St. in Manila. Lehom, who is believed to be living in the country for about four years now, allegedly managed to fraudulently withdraw a total of P108,700 in cash since October 2017.

Quoting Frits Gary Deseo, a representative of the bank which name was withheld, the Radyo Inquirer report said that bank personnel alerted their on-duty security guards about the suspicious withdrawals allegedly by Lehom.

They subsequently reviewed the bank’s closed-circuit television and found that Lehom was allegedly withdrawing from the ATM using clone cards.

Preliminary inquiries also showed that the suspect started the scam on October 3, 2017, followed by more withdrawals on November 28, December 5, and December 18.

Radyo Inquirer reported that Lehom was consequently brought to Manila Police District Station 5 and would be facing charges in violation of Republic Act 8484 or the Access Devices Regulations Act of 1998.              /kga