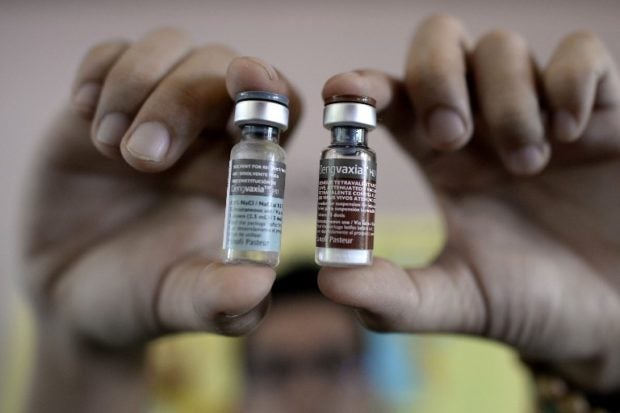 This photo, taken on April 4, 2016, shows a nurse showing vials of the dengue vaccine Dengvaxia, developed by French medical giant Sanofi Pasteur, during a vaccination program at an elementary school in Metro Manila. (Photo by NOEL CELIS / AFP)

A group of physicians and scientists has issued a statement expressing dismay at how the controversy surrounding the anti-dengue Dengvaxia vaccine has started to “erode” public confidence in the country’s vaccination programs.

The statement, which was emailed to media outfits, was signed by 58 doctors, including former Health secretaries Esparanza Cabral and Manuel Dayrit.

“The unnecessary fear and panic, largely brought about by the imprudent language and unsubstantiated accusations by persons whose qualifications to render any expert opinion on the matter are questionable, at best, have caused many parents to resist having their children avail of life saving vaccines that our government gives,” the statement read.

“Even deworming efforts are being met with suspicion and resistance, with many parents afraid to give consent; all because of the misinformation that has been allowed to take hold of the collective psyche,” the group said.

The group said that if the trend would continue the public might face outbreaks of “debilitating and life-threatening diseases” that the government would be able to control through vaccination programs.

The only way to continue to prevent deadly epidemics of infectious diseases, the group said, would be to sustain a high rate of immunization or vaccination in the population.

“This will not be possible if parents refuse to consent to vaccination for their children because of fear,” the group said.

The group also lamented how some “hard working, competent, honest and dedicated” physicians and career personnel in the Department of Health (DOH) were “maligned and deprived of their right to defend themselves.”

“Available documentary evidence that might have been offered to prove the innocence of some of the accused has not been made public for reasons that we can only speculate on. The public hearings have become avenues for “expert bashing” rather than a genuine search for truth,” the group said.

Moreover, the group stressed that “there is no such thing as a perfect vaccine.”

“The history of vaccination from the 18th century to the present is rife with controversy. A study of the history of these controversies teaches us lessons about the tragic consequences and harm to the general public that result when we allow hysteria to rule over logical and scientific judgment,” according to the group.

The group also expressed support in the DOH’s decision to suspend the Dengvaxia immunization program until there would be a quick cost and effective way to determine whether a person has had dengue in the past or not.

But the group also urged the DOH not to remove Dengvaxia from the market.

“Already we are faced with patients who have had dengue infection in the past, who are now at a loss because they cannot get their doses of Dengvaxia because it has been taken out of the market,” it said.

The group also urged their colleagues in the medical profession to be careful about “unfairly slandering colleagues by careless, sweeping and unsubstantiated accusations.”

“We urge those who have documentary evidence that can truly shed light on the current controversy to please come forth with the truth. And we beg our legislators to be open to hearing both sides,” the group said.

“Allowing half-truths to prevail is dangerous. It not only causes persistent confusion but has also caused mass demoralization among the dedicated and hard working personnel and physicians of the DOH. This is both cruel and unjust,” it said. /atm