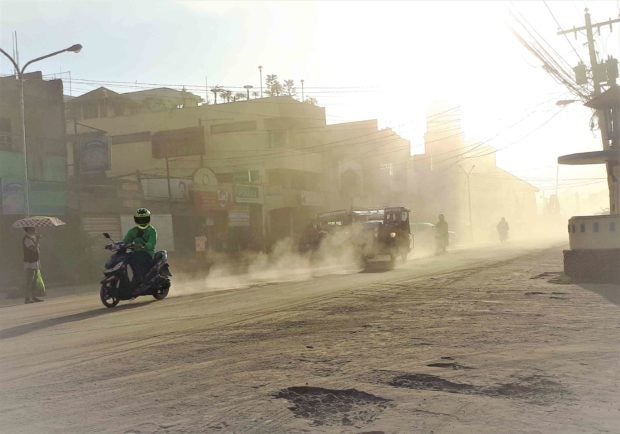 Motorists drive with difficulty along the ash-covered streets of Guinobatan and other towns in Albay province as Mt. Mayon showers them with ash in a series of eruptions. (Photo by MICHAEL B. JAUCIAN / Inquirer Southern Luzon)

GUINOBATAN, Albay — The air quality in Guinobatan town and Ligao City in Albay province has reached a critical level based on monitoring conducted by the Environmental Management Bureau (EMB) in areas around Mount Mayon.

The ambient air monitoring equipment positioned at the town plaza of Guinobatan measured the air quality index on Tuesday at 553, which was beyond the normal range of 150.

From Jan. 21 to 24, the ambient air quality was also found out to be “acutely unhealthy” in the same town and in Ligao City due to ashfall, the EMB said.

Areas most commonly affected by ashfall are the towns of Camalig and Guinobatan and Ligao City.

“The air being inhaled in Guinobatan is very hazardous, containing high substances [of pollutants or particulate matter] due to ash spewed out by the volcano,” said Nathan Campo II, EMB specialist.

The EMB said people should limit outdoor activities while those with heart or respiratory diseases should stay indoors as they might “experience more serious health effects.”

The EMB said this status was a notch below emergency status, where the “entire population is even more likely to be affected by serious health effects.”

EMB monitoring conducted during the same period in Legazpi City and Camalig town showed the air quality index to be “good,” meaning air pollution posed little or no risk to people in these areas.

More than 5,000 evacuees had been treated for acute upper respiratory ailments since Mayon volcano spewed out ash and lava two weeks ago, records from the Department of Health (DOH) in Bicol region showed.

He said many of them were already suffering from cough and colds even before they sought shelter in evacuation centers. Others had complained of fever and hypertension.

Arevalo said the spread of diseases was very hard to contain since the evacuation centers were overcrowded.

Records showed that 5,034 evacuees were treated by DOH medical teams in evacuation centers from Jan. 15 to 30.

Asked if respiratory ailments were caused by ashfall from Mayon, Arevalo said: “[It’s] possible. But as I have said, even in normal condition and without evacuation, respiratory tract infection is the prevalent illness in the community year-round, throughout the country.”

Records from the Albay Public Safety and Emergency Office (Apsemo) showed that 21,950 families, or 84,415 people, were housed in 78 evacuation centers in Albay.

Health authorities also advised those affected by the ashfall to take the necessary precautions, stay indoors and wear face masks.

Instruments of the Philippine Institute of Volcanology and Seismology (Phivolcs) recorded a significant increase in volcanic activities on Tuesday and Wednesday which, according to volcanologists, were signs of magma intrusion at Mayon’s crater.

Phivolcs recorded 298 volcanic earthquakes in the past 24-hour observation period.

He said the overall condition of Mayon remained in a restive state, where all parameters for an eruptive event were still taking place.