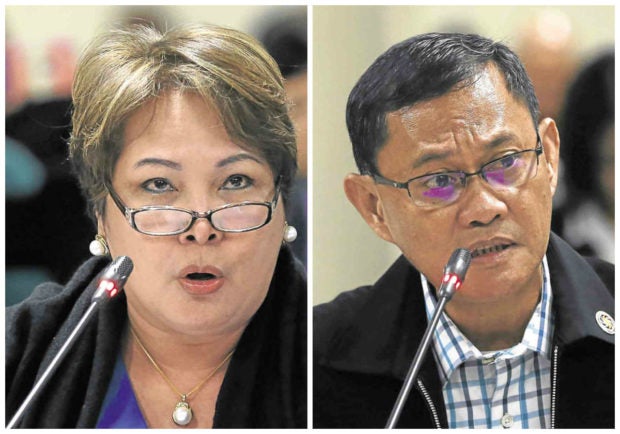 Philippine Charity Sweepstakes Office director Sandra Cam said she will not reconcile with the agency’s general manager Alexander Balutan despite remarks from Duterte asking them to befriend each other.

“I will not reconcile with Balutan. I am very firm with my la patria advocacy, the love of country first. PRRD is just joking on that,” she said.

“You know the President always cracks a joke, I can’t compromise my stand against corruption. I’m just following the marching order of PRRD that corruption must stop now,” Cam said.

In a briefing at the Albay Capitol, Duterte asked Cam to befriend Balutan so the victims affected by the eruption of the Mayon volcano will get more assistance. PCSO, through Cam, donated P5 million to assist the evacuees in Albay, Bicol province earlier this week.

Cam and Balutan had been feuding after Cam exposed the PCSO’s Christmas party at the Edsa Shangri La which costs P10 million. Balutan and resigned PCSO Chair Jose Jorge Corpuz earlier said the party costs only around P6 million.

“Duterte is very passionate in his anti-corruption drive and his marching order for me is to protect the charity fund of PCSO and to increase the income generating schemes. We need to review policies on STL,” she added.

During the Senate budget hearing conducted by the Senate Committee on Games and Amusement, Cam identified Bong Pineda as the gambling lord protecting PCSO officials.

In response, Pampanga Governor Lilia Pineda, Bong Pineda’s wife, then called out Cam in a television interview and asked her not to accuse without evidence.

(What I’m saying is it’s easy to accuse someone, but is it true? If they have personal differences, they shouldn’t involve other people.)

On Saturday, Cam reacted to the governor’s statement asking her to stop answering for her husband Bong Pineda and face the issue squarely himself. /je