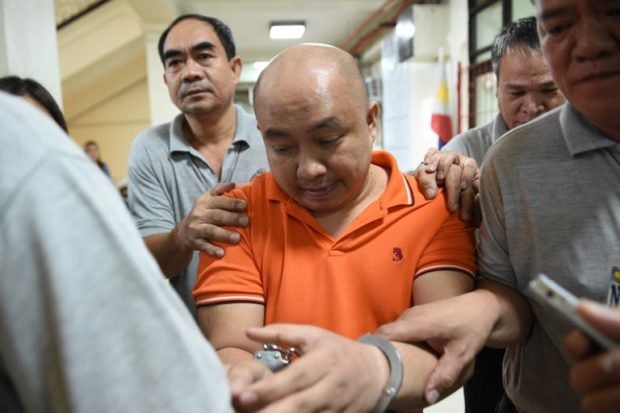 Doctor Russell Salic (in orange) is escorted by National Bureau of Investigation (NBI) agents following a court hearing in Manila on November 7, 2017. Salic is accused of wiring money for a foiled plot targeting New York landmarks and concert sites in New AFP FILE

A doctor being linked to the Maute terrorist group and accused of supporting a foiled terror plot in New York is now facing criminal cases for the abduction and beheading of sawmill workers in 2016.

Dr. Russel Langi Salic and 53 others have been charged before the Regional Trial Court Branch 11 of Malabang, Lanao del Sur.

The four other were released after their employer Hadja Anisah Gunda who personally worked for their release.

Gunda and the four survivors executed an affidavit identifying their abductors, including Salic, whom they claimed was in a room cleaning firearms.

They said Salic even ordered Maute gunmen to give them coffee and to guard them thoroughly so that they could not escape.

Salic, in his counter-affidavit, denied the allegation saying he had never set foot in Butig.

He said that on the date of the abduction, he was working as a resident physician at the Northern Mindanao Medical Center (NMMC) in Cagayan De Oro City. On April 5, 2016 he said he want to Puerto Princesa, Palawan, to attend the 26th Philippine Orthopedic Association (POA) Mid-Year Convention. He said he returned to NMMC on April 10 as proof of his Daily Time Record.

But the complainants maintained that they saw Salic at the Maute lair. They said they had no reason or ill motive to implicate Salic in their abduction since they did not know him personally.

“After a careful review and evaluation of the evidence submitted by the parties, the undersigned finds probable cause to charge respondents,” the DOJ resolution stated.

“Criminal liability exists notwithstanding non-participation in every detail in the execution of the crime… Where conspiracy has been established, it is unnecessary to pinpoint who among the accused inflicted the fatal blow… The inaction of a respondent where he could have prevented the crime only reveal his complicity thereto,” the resolution stated.

The US government is also seeking Salic’s extradition on allegation that he helped fund a plot that included attacks on Manhattan’s Times Square and the city’s subway.

The allegation against Salic was based on the testimony of Canadian El Bahnasawy who was arrested in New Jersey in May 2016 and pleaded guilty to terrorism charges. He described Salic as “Abu Khalid” a trusted supporter of ISIS or the Islamic State.

Salic allegedly transferred the equivalent of $423 to fund bomb-making materials for the attack. /cbb