The Philippine National Police cannot guarantee that a fresh crackdown on illegal drugs will be bloodless, but it says it will “do everything” to make it “less bloody.”

In fighting drugs, Dela Rosa said, police officers have to protect themselves.

“That’s why I cannot give you a 100-percent foolproof antidrug campaign that is bloodless,” Dela Rosa told reporters at the PNP headquarters in Camp Crame, Quezon City.

“I am willing to give up my post if you can show me someone who will succeed in the antidrug [campaign] with no deaths. That’s impossible. That’s baloney,” Dela Rosa added.

“All we can do is give you the assurance that we will do everything to make this antidrug campaign less bloody, because we are not dealing with people in their right minds,” he said.

The PNP’s return as an implementer of President Duterte’s war on drugs coincided with its 27th anniversary.

It is not retaking the lead role in the campaign, however, as that job still belongs to the Philippine Drug Enforcement Agency (PDEA), Malacañang said.

Presidential spokesperson Harry Roque told reporters that the administration was hoping the PNP had “learned its lesson,” referring to the PNP’s demotion from the lead role in the drug war last year because of thousands of deaths in the campaign that drew international expressions of concern over human rights violations in the Philippines.

The New York-based Human Rights Watch has estimated that more than 12,000 Filipinos had been killed since the launch of the drug war in June 2016.

The PNP was also weighed down by scandal after officers from its Anti-Illegal Drugs Group (AIDG) were involved in the kidnapping and murder of a South Korean businessman disguised as antinarcotics operation.

Mr. Duterte dismantled the AIDG, pushed the PNP aside last October and gave the lead role in his war on drugs to the PDEA.

Under the PDEA, however,  only two suspects were killed in antinarcotics operations.

Last month, Mr. Duterte ordered the PNP to resume its antidrug operations due to a “notable resurgence in illegal drugs,” but made it clear that it would remain a support force to the PDEA.

“And, of course, they are now conducting Tokhang also with the involvement of the PDEA, [which] has retained the lead in the implementation of the Dangerous Drugs Law,” Roque said.

He also said the Palace hoped the relaunched Oplan Tokhang would not be as controversial as the previous campaign. 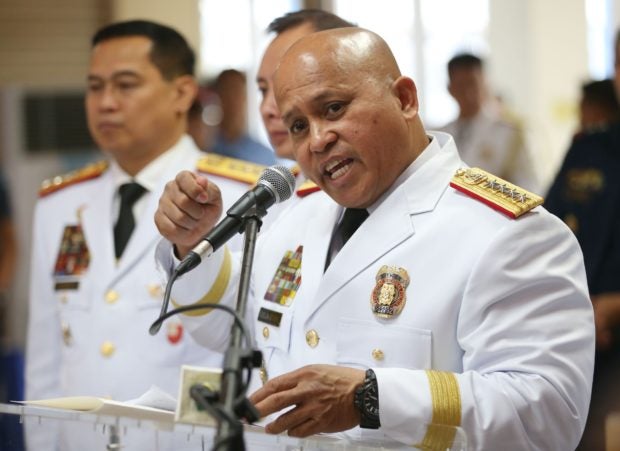 “Controversy will only blur the real intentions behind Tokhang, which is really the fight against dangerous drugs,” he said.

In the old Oplan Tokhang, police visited the homes of drug users and suspected drug dealers anytime and pleaded for them to surrender.

This time, police, accompanied by barangay officials, reporters and members of human rights groups, will make the visits only between 8 a.m. and 5 p.m.

Police are encouraged to wear body cameras during the visits, and they are under orders not to make visits on Saturday and Sunday.

In Quezon City, officers from the Batasan Police Station, which scored more than 100 kills in the first year of the drug war, visited the homes of 11 suspected drug users accompanied by reporters.

The officers pleaded with the suspects, whose names appeared on the barangay watch list, to turn themselves in for rehabilitation.

They didn’t force anyone to undergo rehabilitation. They just left when the suspects said no.

No one was killed, making Aurora Balcarse, mother of one of the suspects, say she supported the new Tokhang.

“Before, they barged into the homes of suspects, who were shot in their sleep,” she said. “Now I know that won’t happen again.”

In Caloocan City, where the entire police force was fired last year over the killings of the three teenagers, the owner of the house in Barangay 154 that police had mistakenly picked to visit exploded in anger.

“Make sure you knock on the right door,” the owner shouted at the officers and barangay officials. “We are already traumatized as it is.”

But the man, who declined to be identified, admitted that his son was a drug user.

“What we’re doing is a sympathetic and friendly approach. Ideally, when we knock and plead we hope they will comply with our request to talk. But if they don’t want to, that is also OK. We will not force them,” Mangelen said. —With reports from Matthew Reysio-Cruz, Krixia Subingsubing and Allan Nawal