Local execs ask to be removed from drug lists 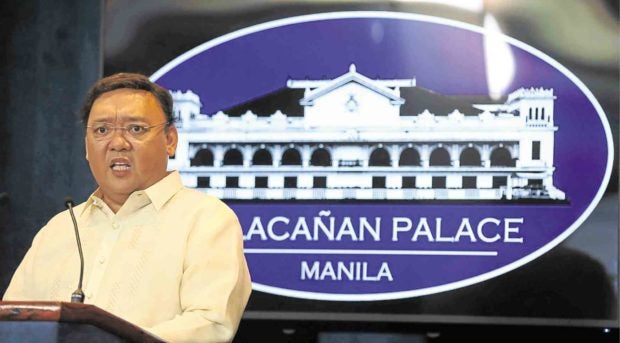 ILOILO CITY—Local politicians named by President Rodrigo Duterte as allegedly involved in the illegal drug trade have sought the help of presidential spokesperson Harry Roque to clear their names.

“I do have requests from a number of local politicians for their names to be cleared,” Roque told a news conference here on Sunday.

It would be up to law enforcement agencies to act on requests from local officials, he added.

But Roque said “the clearing process involves dealing with the different law enforcement agencies that have a mandate to participate in the campaign against illegal drugs.”

Roque issued the statement when asked about the process of clearing those accused of being narcopoliticians after two Iloilo mayors, who were earlier named by the President as involved in illegal drugs, recently took their oath as members of the administration party, Partido Demokratiko Pilipino-Lakas ng Bayan (PDP-Laban).

Mayor Alex Centena of Calinog town and Maasin Mayor Mariano Malones, former members of the Liberal Party, were among those who joined PDP-Laban in a mass oath-taking in Pototan town. They were led by Iloilo Gov. Arthur Defensor and his son and namesake, Iloilo Rep. Arthur Defensor Jr.

These officials have repeatedly denied the President’s allegations.

In an earlier interview, Malones said he met with the President to deny his involvement in the drug trade.

He said Mr. Duterte told him to help clear his town of illegal drugs.

In the press conference, Governor Defensor said the mayors were cleared by the office of Speaker Pantaleon Alvarez, PDP-Laban secretary general, based on a copy of the “latest” list of the President.

“What I could say at this point is that PDP-Laban, before [it] accepts members, has [its] own way of ensuring the integrity of people that [it] accepts. I also know that the information on these drug personalities was provided by several government agencies,” Roque said.