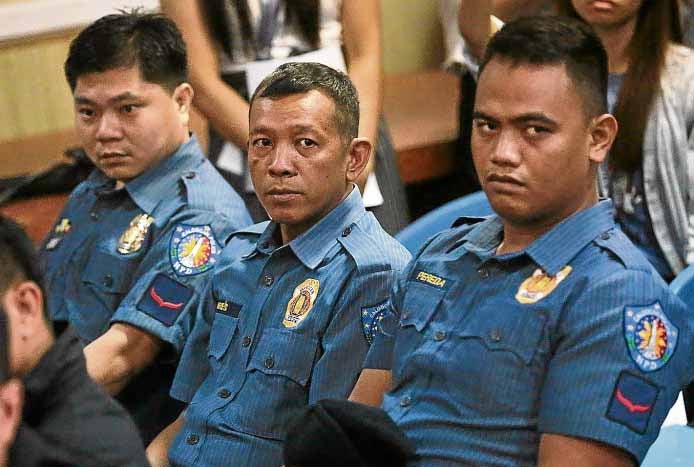 PRELIMINARY INVESTIGATION Appearing for the preliminary investigation of the killing of
17-year-old Kian Loyd delos Santos at the Department of Justice are PO1 Jerwin Cruz, PO3 Arnel Oares and PO1 Jeremias Pereda. One of the witnesses(below) takes her oath. —GRIG C. MONTEGRANDE

The Department of Justice (DOJ) on Monday filed criminal complaints against three members of the Caloocan police for the death of 17-year old Kian Loyd delos Santos.

The DOJ resolution cited the testimonies of eye witnesses, including a minor, who all said that they saw the police officers talked to Kian before he was dragged to the Tullahan River.

Two of the witnesses who were mentioned in the resolution narrated how Kian was pushed to the muddy part of the area and how the victim begged before he was shot several times.

“This point is extremely significant since it only shows that there was no unlawful aggression on the part of Kian during the time he was shot and killed,” the DOJ resolution stated.

The DOJ also noted that the forensic results from both the Philippine National Police (PNP) and the Public Attorneys’ Office (PAO) Forensic Laboratory showed that “the gunshot wounds sustained by Kian were all found at the back particularly the head.”

“Forensic results from the PNP and PAO prove an indisputable conclusion that Kian was shot while in somewhat kneeling/fetal position,” the DOJ resolution further stated.

The police officers argued that they were in a legitimate police operation and Kian was killed only because he tried to fight the arresting cops. The police added that two sachets of shabu and a .45 caliber were found on his body.

But the DOJ said the evidence at hand “clearly create doubts on the truthfulness of respondents PO3 Oares, PO1 Pereda and PO1 Cruz that the killing was done in the course of a legitimate drug operation.”

A case for violation of domicile was also filed against Pereda and Cruz for entering Kian’s house without a search warrant.