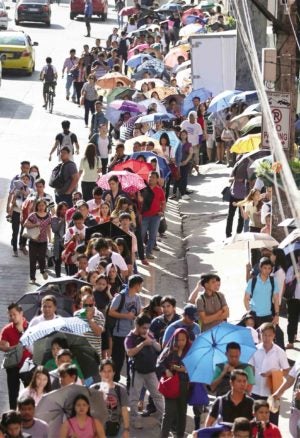 “Many of the spare parts intended to increase MRT 3’s reliability have been ordered as of Dec. 29. With delivery lead times of 30 days to 6 months, delivery of critical components will begin in February, and restoration of service reliability is expected to begin toward the latter part of February and gradually thereafter,” the DOTr said in a statement on Saturday.

It apologized to those affected by the electrical fire that broke out in one train on Friday, leading to the unloading of around 600 passengers and the disruption of services for nearly an hour.

“Fault analysis is ongoing, and in the interest of accuracy and transparency, DOTr has directed MRT 3 management to release to the public their technical findings at the soonest possible time,” it said.

According to DOTr, it fully supports the MRT 3 management’s efforts to ensure the train system operates safely.

“The DOTr appeals to the riding public’s understanding while it pushes ahead, in the most expeditious manner, strategies and actions to effectively and sustainably restore and rehabilitate the current MRT 3 system — a system that has deteriorated due to cumulative errors in policy and operational decisions made across several administrations,” it added.

The DOTr said the purchase of spare parts was just the next step after government took over maintenance of the MRT 3 from a private contractor.

The MRT 3 Maintenance Transition Team (MTT) is supposed to oversee the train’s maintenance for three to six months until a replacement maintenance service provider can be found.

The DOTr also referred to an agreement with Japan in which the latter expressed its commitment to help rehabilitate and properly maintain the MRT 3 starting in May.

Japan was also asked to ensure that the maintenance provider it would nominate was “highly qualified and with a proven track record.”

The DOTr earlier said it would be pursuing an unsolicited proposal for the 30-year operation and maintenance of MRT 3 from Metro Pacific Light Rail Corp. The proposal would soon be endorsed to the National Economic and Development Agency.

The entire MRT 3 system is undergoing an independent audit and assessment by TUV Rheinland to give DOTr more inputs and guidance on the interventions needed to rehabilitate and restore its reliability.