Who are the Haqqanis, Afghanistan's most feared insurgents? | Inquirer News
Close
menu
search

Who are the Haqqanis, Afghanistan’s most feared insurgents? 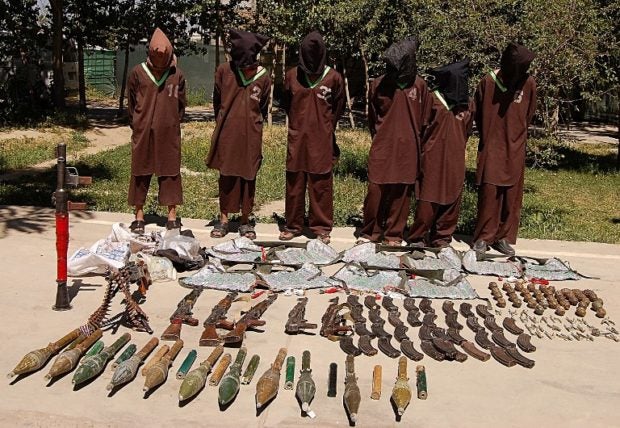 Insurgents suspected of being from the Haqqani Network are presented to the media at the Afghan National Directorate of Security (NDS) headquarters in Kabul on May 30, 2013. Afghanistan on Saturday, Jan. 27, 2018, blamed a devastating suicide bomb attack in Kabul that killed at least 95 people and wounded 158 others on the Taliban-affiliated Haqqani Network. AFP

ISLAMABAD, Pakistan — Afghanistan on Saturday blamed a devastating suicide bomb attack in Kabul that killed at least 95 people and wounded 158 others on the Taliban-affiliated Haqqani Network, former CIA assets now considered one of the most dangerous factions fighting US-led NATO forces in Afghanistan.

Led by Sirajuddin Haqqani, who doubles as the Afghan Taliban’s deputy leader, the extremist group has been blamed for spectacular attacks across Afghanistan since after the US invasion.

Long suspected of links to Pakistan’s shadowy military establishment, the network was described by US Admiral Mike Mullen in 2011 as a “veritable arm” of Pakistani intelligence.

“When you hear US officials, including in private settings, talking about what worries them the most, they always talk about the Haqqanis,” said analyst Michael Kugelman, of the Wilson Center in Washington.

The group was founded by Jalaluddin Haqqani, an Afghan mujahideen commander fighting the Soviet occupation of Afghanistan in the 1980s with the help of the US and Pakistan.

Jalaluddin gained notoriety for his organization and bravery, garnering attention from the CIA and a personal visit from US congressman Charlie Wilson.

A fluent Arabic speaker, Jalaluddin also fostered close ties with Arab jihadists including Osama Bin Laden who flocked to the region during the war. Later, Jalaluddin became a minister in the Taliban regime.

Now designated a terrorist group by the US, the Haqqanis are known for their heavy use of suicide bombers.

They were blamed for the truck bomb in the heart of Kabul in May that killed around 150 people — though Sirajuddin later denied the accusation in a rare audio message.

The network has also been accused of assassinating top Afghan officials and holding kidnapped Westerners for ransom.

That includes recently released Canadian Joshua Boyle, his American wife Caitlan Coleman, and their three children — all born in captivity — as well as US soldier Bowe Bergdahl, who was released in 2014.

Where are they now?

Following the US invasion of Afghanistan, Taliban fighters flooded across the border into Pakistan, where they regrouped before launching an insurgency against the Americans.

That included the Haqqanis, who coordinated attacks on NATO from across the border in their stronghold of Miran Shah, the biggest town in North Waziristan, one of Pakistan’s semi-autonomous border tribal areas.

The US has launched repeated drone attacks targeting the group while Pakistan’s military has conducted successive clearing operations, though skeptical Afghan officials have noted they always seemed to miss the Haqqanis.

Pakistan intensified a military operation in the area in 2014, however, and some militant sources say the pressure has forced many of the Haqqanis underground or over the border into their Afghan strongholds, claims that AFP could not confirm.

Why are they linked to Pakistan?

Pakistan sees its arch-nemesis to the east, India, as an existential threat, and has long sought influence over Kabul as a bulwark against Delhi.

The Haqqanis have frequently been accused of targeting Indian installations in Afghanistan, spurring speculation they were overseen by Pakistani intelligence agencies.

“For Pakistan the calculus comes down to India,” said Kugelman.

“It views the Haqqanis and also more broadly the Afghan Taliban as a useful asset to help push back against the presence of India in Afghanistan.”

Politicians and retired military officials in Islamabad acknowledge privately that having open channels with the Haqqanis is vital.

Some stressed the nature of the connection. “There’s a difference between contact and supporting them or being part of them,” Mehmood Shah, a retired brigadier who worked in Pakistan’s tribal areas, told AFP.

What does the US want Pakistan to do?

Washington has long pressured Pakistan to crack down on militant groups, with the Haqqanis a top priority.

US President Donald Trump turned up the heat last summer when he accused Pakistan of playing a double game in Afghanistan and upbraided Islamabad for sheltering “agents of chaos”.

Islamabad has repeatedly denied the claims and accused Washington of ignoring the thousands of Pakistani lives lost in its struggle with militancy.

The recovery of Boyle, Coleman, and their children came weeks later, with Pakistan using its role in securing their freedom to urge the US to trust it is doing its best.

But — Pakistan’s desire for strategic depth aside — a crackdown on the Haqqanis might not be easy in a tribal society where social relations matter, warned Pakistani political analyst Imtiaz Gul.

“You can’t simply pluck out somebody because they’ve gone politically incorrect,” he said. /cbb