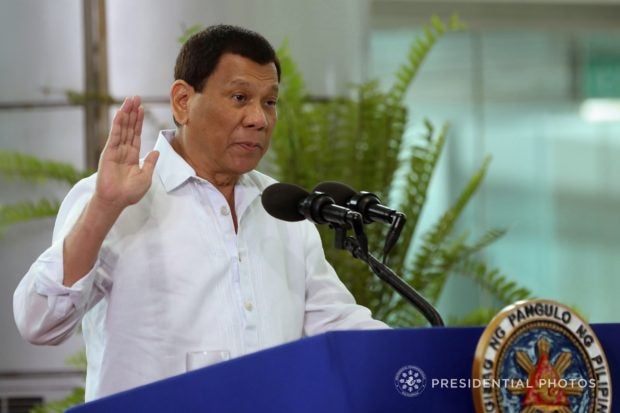 DAVAO CITY – President Duterte on Saturday publicly denied any hand in the filing of charges against his predecessor, Benigno Aquino III, in connection with the deaths three years ago of 44 members of the police’s elite Special Action Force (SAF) in Mamasapano, Maguindanao.

The charges for graft and usurpation of authorities against Aquino were filed by the Ombudsman at the Sandiganbayan on November 8 last year.

The Volunteers against Crime and Corruption (VACC) – whose officials were known to be close allies of Duterte’s – had also filed a complaint but the Ombudsman dismissed it in July after finding “no probable cause” to charge Aquino with reckless imprudence.

Speaking to reporters here after his arrival from a state visit to India, Duterte said he had no hand in the filing of the charges against his predecessor.

“It is not my style. It is not in my system,” he said, adding that he was also not behind the filing of the impeachment complaint against Chief Justice Maria Lourdes Sereno and Ombdusman Conchita Carpio-Morales.

Duterte said he had also decided not to form the Mamasapano Commission to investigate the botched anti-terror operation that also killed 25 Moro gunmen and civilians.

“Not anymore because I realized that once again…anyway, it (the case) had been filed already. What more do you want?” Duterte asked.

“It’s already there, Pnoy (Aquino) had been sued,” he said.

It was on January 23 last year when Duterte – in a speech delivered before the anniversary of the now infamous Mamasapano incident – announced he was creating the commission “which would be like the Agrava Commission.”

“I will create a commission of seven. I will appoint men of integrity and honor. If they will accept it, I will choose mostly justices of the Supreme Court and few of the civilian sector, maybe a lawyer. I would not recommend someone I know,” he added.

“We will bestow to the commission the powers exactly given to the Agrava commission, during the time of Aquino’s death. Let us see,” he was, in reference to the Marcos-created board that investigated the assassination of former Senator Benigno Aquino Jr.

But on Saturday, Duterte said even without the commission, “we can only presume that they (Aquino and former Philippine National Police chief Alan Purisima) did it in the wrong way.”

“Murphy’s Law. If anything can go wrong, it will go wrong. Mamasapano, I can’t (understand). There’s only one regret,” he said.

Duterte said the Aquino government could have used all the resources at hand to save lives during the clashes.

“My sentiment is, because the place has many (Tactical Operations Group), of the Air Force,” he said.

Duterte said help did not come for the embattled policemen.

“Now, they were pinned down, started in the 11, maybe 10 o’ clock in the morning. They were already pinned down. Sunset came (and no help arrived),” he added.

Duterte spared the military from blame saying “(t)he Army was not authorized to do anything because this was an exclusive affair.”

“Now we will know. I’m not prepared to accuse personally. My only question was why did you allow the (poliemen) to be pinned down and die?” he asked, obviously addressing Aquino./asu