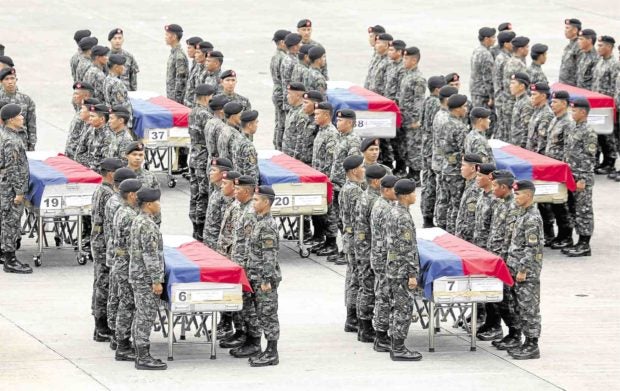 Caskets bearing the remains of some of the 44 Special Action Force commandos arrive at Villamor Airbase days after the Mamasapano massacre on Jan. 25, 2015. —INQUIRER PHOTO

Former President Benigno Aquino III should be held accountable for the botched Mamasapano operation in 2015, Malacañang said on Friday as it backed the Office of the Solicitor General’s move to pursue criminal cases against the former commander in chief.

Solicitor General Jose Calida has asked the Supreme Court to order the Ombudsman to file cases of reckless imprudence resulting in homicide against Aquino for the death of 44 Special Action Force (SAF) commandos in the operation to kill Malaysian terrorist Zulkifli bin Hir, alias Marwan.

“There ought to be accountability for those responsible for the SAF 44 debacle,” presidential spokesperson Harry Roque said, expressing support for the solicitor general’s move.

The commandos killed Marwan in the operation, codenamed Oplan Exodus, but lost 44 of their own in the fight against fighters from the Moro Islamic Liberation Front and Bangsamoro Freedom Fighters in Mamasapano, Maguindanao.

In the finger-pointing that followed, Aquino was blamed for allowing then suspended Philippine National Police chief Alan Purisima to handle the operation.

Other top police and military officials were allegedly kept in the dark about it to prevent any leaks.

Aquino has repeatedly shielded himself from responsibility, saying the ground commander had disobeyed his instruction to coordinate with the military, which he said could have provided artillery and air support to the commandos.

But Getulio Napeñas, former director of the PNP SAF, said on Thursday that Aquino should own up to the debacle, having sent the commandos to get Marwan in the morning of Jan. 25, 2015.

Napeñas made the statement on the third anniversary of the Mamasapano massacre.

“I hope Aquino will face his responsibility and not do what he did after the clash, which was evade questions,” Napeñas said.

Widows and kin of the slain troopers welcomed the solicitor general’s move, saying they were beginning to see justice for those who died in Mamasapano.

Sen. Grace Poe, whose Senate committee on public order investigated the massacre and found Aquino liable for the death of the 44 SAF commandos, urged the Filipinos not to forget the lessons of Mamasapano.

“The lessons of Mamasapano, including the need for justice, should not be buried with the dead,” she said.