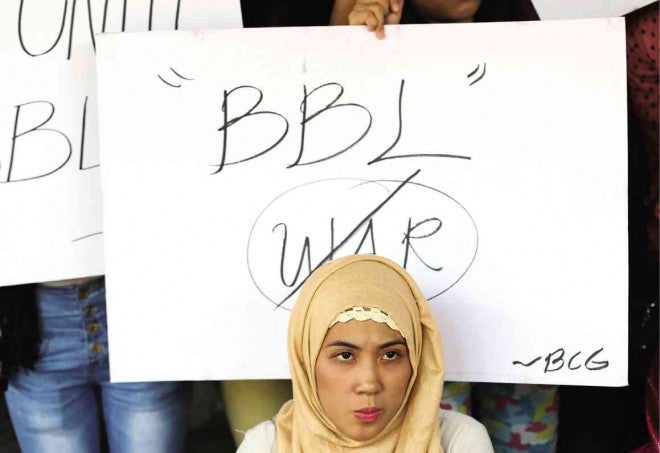 FILE – A member of a pro-BBL group joins a rally outside the venue of a Senate hearing on the draft law that would create a new autonomous region in Mindanao. RAFFY LERMA

COTABATO CITY— Mindanao leaders on Thursday urged Congress to refrain from “experimenting” and “watering down” the proposed draft of the Bangsamoro Basic Law (BBL), saying that the legislation would be their last shot at attaining everlasting peace and progress in the southern region.

House of Representatives Deputy Speaker and Maguindanao Rep. Bai Sandra Sema has appealed to Congress to pass a complete and strong version of the BBL.

Likewise, MILF’s central committee Vice Chair Ghazali Jaafar reminded that the BBL should not be “watered down” that it would turn out not to be autonomous at all.

“Huwag natin hayaang watered down. We believe that there’s still hope for a better life here in Mindanao… Dignified solution to end the war is BBL and the establishment of the BBL government,” Jaafar said

Meanwhile, a representative of the Tumpukan Bangsa Sama, Inc. (TBS, Inc.) has lamented their apparent lack of representative at the Bangsamoro Transition Commission (BTC) which crafted the draft BBL.

“The intent of BBL is to correct historical injustice, they say. But in the event, some are not also represented  in the BTC. We therefore conclude that BBL will not completely solve historical injustice against us, the Bangsa Sama people in Tawi-Tawi,” Abdulrahman Keril Idris said.

“When we say BBL, we are talking about inclusion. But how come our rights as Bangsa Sama are being excluded?” he added.

Responding to the queries of Keril, Zubiri said that the selection of the members of the BTC was not within the control of Congress as it was chosen by the executive arm of the government.

“But I promise you, you will have your chance. On February 8 we would be in Tawi-Tawi and we will give you all the time to suggest on how to improve the BBL,” Zubiri said.

Under the draft BBL, a parliamentary form of government would be established in Mindanao.

He said that in the midst of the many Bangsamoro problems, including issues on ancestral domain, displaced and landless Bangsamoro, and human rights issues among others, lies the core problem of “genuine self-governance” which could be answered by the BBL.