Aquino shoots back at Napeñas: ‘He made himself look incompetent’ | Inquirer News
Close
menu
search

Aquino shoots back at Napeñas: ‘He made himself look incompetent’ 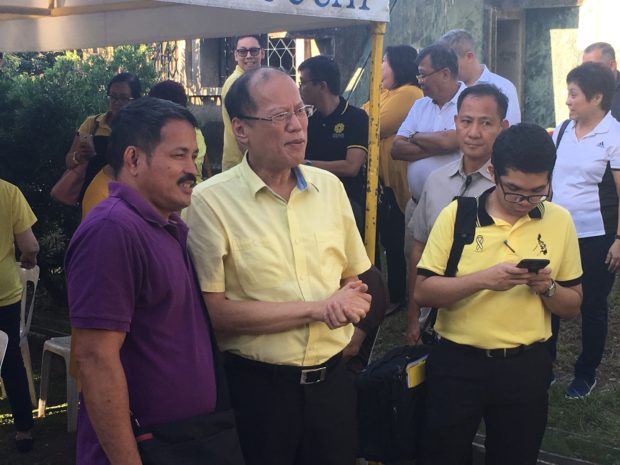 Former president Benigno Aquino III on Thursday shot back at the former chief of the Philippine National Police-Special Action Force who earlier said that the “incompetence” of his former commander in chief led to the death of 44 elite police officers in Mamasapano, Maguindanao, exactly three years ago.

“No, no, that’s incorrect. He made himself look incompetent, because he actually performed incompetent,” Aquino said, reacting to a statement of former SAF chief Getulio Napeñas.

At the “day of remembrance” for the third anniversary of the Mamasapano clash at Camp Bagong Diwa in Taguig, Napeñas slammed the actions of Aquino that supposedly tarnished the reputation of SAF.

Aquino maintained that it was Napeñas, the ground commander of the botched Oplan Exodus, who should be blamed for the death of the 44 SAF commandos.

Aquino said he kept on telling Napeñas to coordinate with the Armed Forces of the Philippines so they can get reinforcement against the enemy troops, which numbered at around 3,400.

At the sidelines of the 85th birth anniversary of his mother, former President Corazon Aquino, at the Manila Memorial Park in Parañaque, the former president acknowledged the hurt the families of the slain SAF troopers were feeling.

Malaysian terrorist Zulkifli bin Hir, alias Marwan, who has a $5-million bounty in his head, was killed in the clash in Mamasapano. His Filipino aide Basit Usman had escaped but was killed in a subsequent military operation.