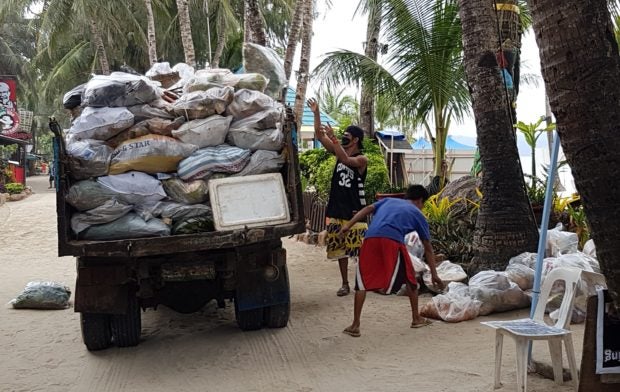 The continued surge in tourist arrivals in Boracay have also spawned problems in collecting and transporting residual waste from the island to the mainland of Malay town (Photo by Nestor P. Burgos Jr./INQUIRER VISAYAS)

ILOILO CITY—-In what could be a sign of further warming up of relations between China and the Philippines, Chinese tourists for the first time surpassed Koreans as the top foreign visitors on Boracay Island.

Chinese tourists on the island reached 375,284 last year followed by Korea with 356,644 and Taiwan with 40,802, according to data from the Malay municipal tourism office.

Chinese and Korean tourists comprised 69 percent of all foreign tourists.

Tourist arrivals from China and Korea have been boosted by more tour groups, trips of cruise ships and direct flights to airports in Barangay Caticlan in Malay and the capital town of Kalibo, said Tourism Western Visayas director Helen Catalbas.

Catalbas said there are direct flights between the Kalibo International Airport and eight airports in China.

Amid the congestion at the Cagban port in Barangay Manoc-Manoc and the main road in Boracay, Aklan Gov. Florencio Miraflores said the provincial government is proposing to build another port in Barangay Yapak at the northern end of the 1,032-hectare island.

The Cagban port is the main port of tourists and residents of the island. The Tambisaan port also in Manoc-Manoc serves as an alternative port when water currents make it difficult for boats to dock at the Cagban port.

Miraflores said a port in Yapak would cater mainly to tourists and residents going to the northern end of the island without having to pass through Cagban and the main road.

He said the plan was still being studied by the Malay municipal government.

The continued influx of tourists and the unabated construction of resorts, hotels and residential buildings have prompted growing calls to regulate tourism and development activities on the island.

The calls have grown stronger as flooding, traffic congestion and other problems on the island have worsened.

The officials laid out their plans including a proposal for President Duterte to issue an executive order creating a multi-agency task force to monitor and implement the programs and projects for the island.