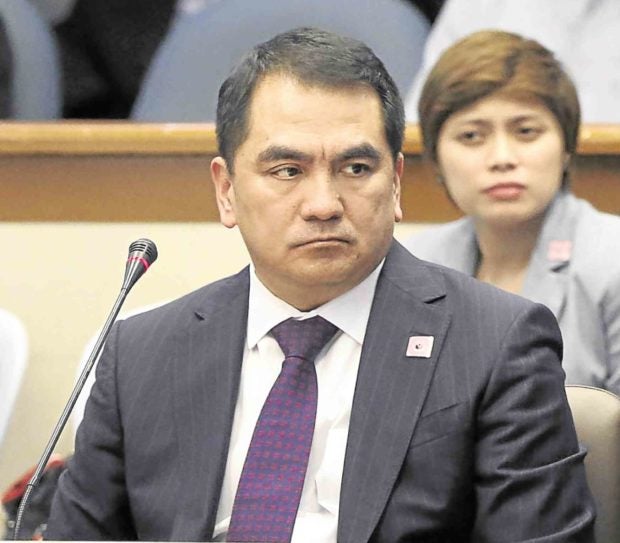 A Senate committee on Wednesday recommended disbarment or disciplinary proceedings against Nilo Divina, the law dean of the University of Santo Tomas, and 18 other lawyers from Aegis Juris fraternity for their role in the fatal hazing of UST law freshman Horacio “Atio” Castillo III last September.

The Senate committee on public order and dangerous drugs, which investigated Castillo’s hazing death, said the lawyers attempted to cover up the crime committed by their fraternity brothers, who are now facing murder charges.

The committee also admonished UST for failing to implement the antihazing law, even as it urged the university to perpetually ban Aegis Juris.

“The culture of violence must be eradicated in every educational institution. With that, UST owes it to the late Horacio Tomas Castillo III and his grieving family to be the first to initiate. There is no statement more forceful and convincing than permanently banning the Aegis Juris fraternity from the university,” the committee said in its investigation report.

The committee also sought administrative action against three fraternity members who are government lawyers for “violating their duty to at all times respect the rights of others, and refrain from doing acts contrary to law, good morals, good customs, public policy, public order and public interest.”

Lacson said he would submit the report to the Supreme Court.

“To our Supreme Court, we hope you [will] show to all of those who know the story of Atio that those saying nothing will happen in this case because of the strong connections (of the fraternity) and this issue will eventually be forgotten are wrong,” Lacson said.

Reached by phone, the chief of  UST’s public information office, Giovanna Fontanilla, said the university had no immediate comment on the Senate findings.

‘I did nothing wrong’

Divina issued a statement, saying his “conscience is clear.”

“I did not do anything wrong, illegal or unethical. I did all I could have done under the circumstances to prevent incidents of hazing from happening [on] my watch as dean of the UST Faculty of Civil Law,” he said.

Divina described as “unfortunate” the allegations in the Senate report “questioning the veracity and sincerity” of his statements to the investigation “and ascribing part of the blame” on him.

He said he was confident of “vindication regardless of the accusations hurled or charges that have been filed or may still be filed.”

Interviewed by reporters after Lacson’s sponsorship speech, Castillo’s parents and his uncle, Geraldo Malvar Castillo, vowed to bring a complaint for the disbarment of  Divina and the other lawyers from Aegis Juris after the release of the Department of Justice (DOJ) resolution of the hazing case.

The uncle urged Divina to resign as UST law dean.

Castillo’s mother vowed to fight for justice for her son and said “everybody accountable should go to jail.”

Castillo’s father said the fraternity got his son and told his son’s killers “to be ready for a big fight.”

Castillo died from injuries he sustained following initiation rites in the fraternity on Sept. 17, 2017.

The Senate committee found that hazing was a “practice” of Aegis Juris, based on testimonies of three members—John Paul Solano (who brought Castillo to the hospital upon instruction by the fraternity), Jason Adolfo Robinos and Marc Anthony Ventura (now in the DOJ’s witness protection program).

The committee also gave credence to the screenshots of two group messages of resident, nonresident and alumni members of the fraternity via Facebook Messenger, as their existence were confirmed by Facebook Philippines.

The group chat messages were also confirmed by Solano and lawyer Ferdinand Rogelio during the hearings.

“The committee joins the public outrage toward the scheming collusion of other members of (the fraternity), especially those admitted to the Philippine bar who are obliged to conduct themselves with honesty and integrity in the manner beyond reproach,” it reported. —WITH A REPORT FROM AIE BALAGTAS SEE