Cam on woman ‘lording’ PCSO procurements below P1M: Who is she?

Former jueteng whistle blower Sandra Cam has presented at a Senate hearing a photo of a woman, who was allegedly “lording” procurements amounting to less than P1 million in the Philippine Charity Sweepstakes Office (PCSO).

“I don’t say you went to Europe, but I have a picture here and I want Mr. Chairman, for General Manager Balutan to identify who is this woman?,” Cam said during a joint hearing of the Senate committees on games and amusement, and government corporations, and ways and means on Wednesday.

Cam, a newly-appointed board member of the PCSO, was referring to General Manager Alexander Balutan, who was also present in the hearing. But Balutan questioned the relevance of the photo in the ongoing hearing on the Charter of the agency. 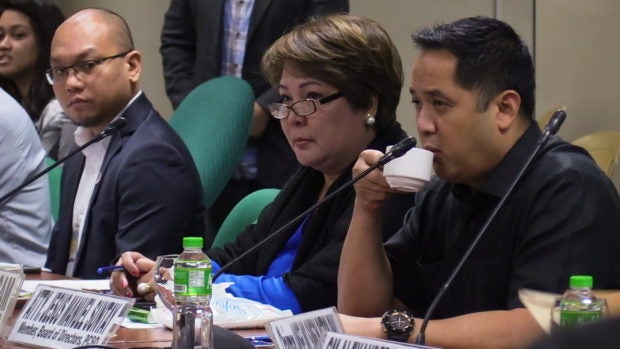 Senator Panfilo Lacson, who was presiding over the hearing as chair of the Senate committee on games and amusement, advised Cam to stick to the issues.

Cam proceeded anyway and explained why she was presenting the photo to the hearing.

“The reason why I’m showing this picture to you is because this woman is a apparently a consultant in PCSO and she’s lording the procurement below P1 million and she’s the one in charge for the procurement of corporate giveaways during the Christmas party,” she said.

When Lacson asked if the woman in the picture was a consultant of PCSO, Balutan said: “I think so. Yes sir.”

Before this, Cam became emotional when she read her opening statement as she urged Congress to go after corrupt officials in the PCSO.                       /kga