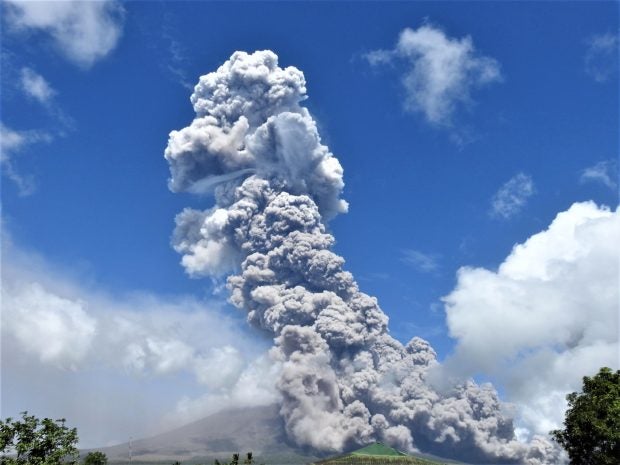 Mt. Mayon spews column of ash into the sky about 5 kilometers in height around 12: 45 PM on January 22, 2018, prompting officials to raise Alert Level 4 at the volcano. The consequent ash fall  hit the towns of Guinobatan, Oas, Polangui, Libon and Ligao City in Albay province. (Photo by Michael Jaucian / Inquirer Southern Luzon)

The latest occurrence was at 6:02 a.m., according to Eric Arbona of Phivolcs, when lava fountain of 300 meters in height caused ash plume that affected areas 5 kilometers southwest from the volcano.

Prior this, Phivolcs said the Mayon Volcano spewed a 500-meter high lava around 2:33 a.m., which consequently produced ash plume that affected areas 3 kilometers south-southwest from the rumbling Mt. Mayon.

On Monday, Phivolcs raised Alert Level 4 at the Mayon Volcano as it spewed thick, huge columns of ash, and dumped heavy ash fall over nearby towns in Albay province.