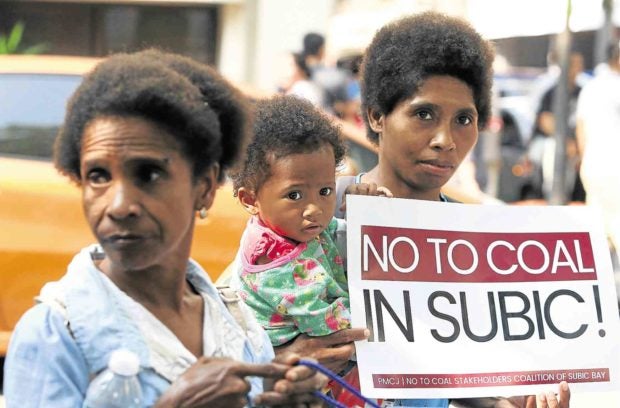 Members of an Aeta family from Zambales province join environmental and other groups in filing a petition in the Court of Appeals in Manila against the construction of a coal-fired power plant in Subic Bay Freeport. —MARIANNE BERMUDEZ

A fresh round of protests was launched on Tuesday to stop the construction of a 600-megawatt coal-fired power plant in the Subic Bay Freeport.

Members of environmental groups from Zambales province and residents of Olongapo City marched in a “solidarity walk” along Manila streets before filing a petition in the Court of Appeals (CA) to stop the project of Redondo Peninsula Energy Inc. (RP Energy).

RP Energy is a consortium composed of the Manila Electric Co., the Aboitiz Group of Companies and Taiwan Cogen Inc.

Around 200 marchers, who belong to Save Subic Bay: No
to Coal Stakeholders Coalition, walked from the University of the Philippines Manila campus to the CA. They were joined by members of the Philippine Movement for Climate Justice (PMCJ).

The lawsuit against RP Energy, the Civil Aviation Authority of the Philippines (CAAP), and the Department of Transportation was filed by the Subic Bay Freeport Chamber for Health and Environment Conservation (SBFCHEC) led by its president, Jen Velarmino-Van Der Heijde.

The petitioners invoked what they described as “the imperative need to rectify the breach of statutory responsibilities of the Department of Transportation and the CAAP under the domestic and international aviation standards.”

They claimed the CAAP issued a height clearance permit allowing RP Energy to erect
a 144-meter dual smokestack for the power plant, atop a 10.68-meter elevated area.

They asked the appeals court to issue a temporary restraining order or writ of preliminary injunction to stop the construction, cancel RP Energy’s height clearance permit, and to provide them with copies of all CAAP documents regarding the project.

The petitioners said RP Energy’s presentation of the project showed the smokestack alone would be 150 meters high, so the total height would be 160.68 meters, way above the 150-meter limitation set by the CAAP for areas around the Subic Bay International Airport.

The Inquirer on Tuesday tried to reach Jason Gavina, corporate social responsibility officer of the RP Energy office at Subic Bay Freeport, for a statement, but he did not take calls. He also did not reply to text messages.

RP Energy began initial construction despite its failure to secure the necessary construction permit from the building permit and safety department of the Subic Bay Metropolitan Authority (SBMA), the petitioners said.

“The proposed coal plant project will hamper the growth of Subic and nearby areas as it would render the existing runway unfit for use. Residents will be robbed of their airport for a plant that would not even produce a single watt of electric power for Subic,” Pedrosa said.

The petitioners also complained about threats of environmental degradation and dangers to health posed by the power plant.

“Certain imperative and essential risks involved with this project have not been properly bared and addressed,” the petitioners said, noting that the legislative councils of Olongapo and Zambales had opposed the coal plant, fearful of its “deadly effects on communities and residents.”

In February 2015, the Supreme Court set aside the writ of kalikasan asked by environmental groups and the No to Coal in Subic Bay Broader Coalition, a group of environmental and renewable energy advocates.

The high court also upheld the validity of the environmental compliance certificate issued to RP Energy by the Department of Environment and Natural Resources in December 2008.

RP Energy had signed a 50-year lease development agreement with the SBMA on June 28, 2010, for the use of 38 hectares of land in the free port.