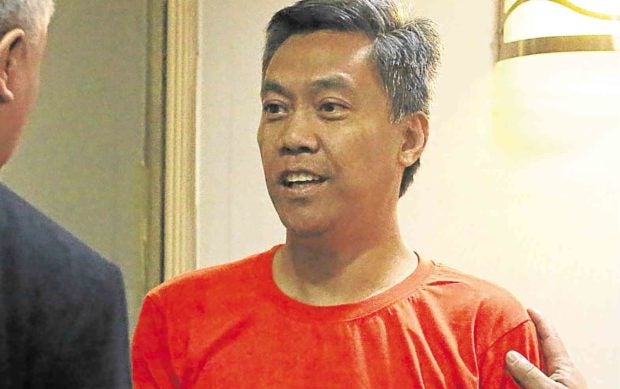 Randy Rubio at the NBI headquarters on Tuesday, days after his arrest in Cabanatuan City. —MARIANNE BERMUDEZ

An alleged accomplice of convicted “pyramid scam queen” Rosario “Rose” Baladjay was arrested by authorities a month after returning from the United States, where he had spent much of the last 15 years.

Agents of the National Bureau of Investigation found Randy Rubio inside a church in Cabanatuan City in Nueva Ecija province on Jan. 19, NBI officials said as they presented him to reporters at the bureau’s headquarters in Manila on Tuesday.

Rubio was arrested based on an arrest warrant issued by Makati Regional Trial Court Branch 58, according to Roel Jovenir, the case investigator from the NBI’s intelligence division.

NBI Deputy Director Ferdinand Lavin said Rubio was one of Baladjay’s employees whom she entrusted with funds collected from investors in a company called Multinational Telecoms Investors Corp. (Multitel), under a scheme which was later exposed as a multimillion-peso scam in 2001.

But instead of giving her the money, Rubio allegedly pocketed it. “He received various investments for Multitel but he did not turn over the money,” Lavin said in a press conference.

Operated by Baladjay and husband Saturnino, Multitel enticed thousands of people into investing in the firm with prospects of a 4- to 15-percent monthly interest rate.

Several estafa cases were later filed against Baladjay for running the “pseudoinvestment” company, which the Securities and Exchange Commission then described as a classic Ponzi scheme that operated on a “rob-Peter-to-pay-Paul” principle.

This meant that the couple were using money obtained from new investors to pay off earlier ones, until the system eventually became unsustainable, with the most recent investors unable to have the returns promised them.

Baladjay was arrested in Mangaldan, Pangasinan province in March 2003, after being cited in contempt for failing to attend Senate hearings on the scam. Along with her husband and nine others, she was charged on the same day by the Department of Justice with syndicated estafa and violation of the bouncing check law and the securities code.

In February 2015, the Court of Appeals (CA) affirmed the decision of the Muntinlupa City Regional Trial Court (RTC) convicting Baladjay of estafa for duping a couple of about P200,000 in the pyramiding scam.

Earlier, in November 2013, the CA also upheld the Makati RTC’s conviction of Baladjay on two counts of estafa, but modified her sentence by increasing her jail term.

The CA sentenced the businesswoman “to suffer an indeterminate penalty of 10 years and one day of prision mayor, to 20 years of reclusion temporal, for each case.” The lower court had originally sentenced Baladjay to a prison term of eight to 14 years.

Rubio, who is also facing charges for syndicated estafa, fled to US at the height of the controversy, the NBI said.

In an interview, Rubio said he came back to the country on Dec. 24 last year “to seek medical treatment.”

He denied going into hiding and claimed that while he knew there was a case pending against him, he had never received any document in connection with the charges. —WITH REPORTS FROM INQUIRER RESEARCH