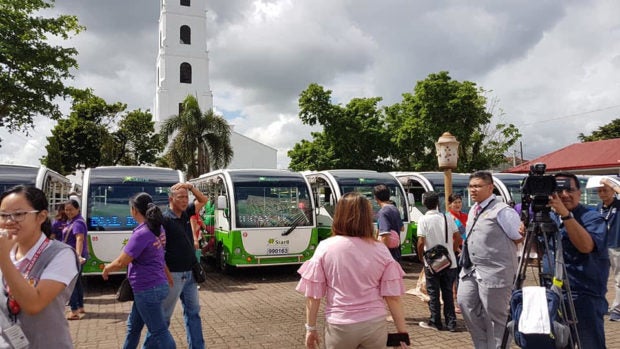 Forty-five solar-powered public utility vehicles, which can accommodate 20 passengers, is now a common sight in the streets of Tacloban City. Contributed photo

TACLOBAN CITY–At least 45 units of electronic public utility vehicles(PUVs) are set to provide transportation to the more than 9,000 families now living at this city’s resettlement sites.

The operation of these PUVs, which is part of the public transportation modernization plan of the government through the Department of Transportation (DOTr), was formally launched here on Tuesday.

“This translates to the commitment of the national government … to provide ease to the relocatees,” she said.

Families living in the 11 resettlement sites in the northern part of Tacloban have been complaining, among others, about the lack of transportation services.

These families were mostly from San Jose and Sagkahan districts, whose houses were destroyed when the city was pummeled by Supertyphoon “Yolanda (International name: Haiyan)” in 2013.

One of those happy with the arrival of the e-jeepneys was Arlene Petilla, 44, who resides at the North Hill Arbours, a relocation site in Barangay Santo Niño.

“We are really having difficulty in [going] to the city proper due to lack of vehicles. We have to wait for hours and fall in line at waiting stations which sometimes is the reason we report late for work or school,” she said.

Petilla works at the nearby town of Palo while her daughter Renalyn is studying at the Leyte National High School in Tacloban City as a Grade 12 student.

Martin Delgra, head of the Land Transportation Franchising and Regulatory Board (LTFRB), said the fleet of vehicles is part of the modernization program being introduced by the Duterte administration in the public transportation sector.

He said that since the vehicles were solar-powered, the vehicles are environment-friendly and also passenger-friendly because it has a bigger and wider body.

The vehicle is also equipped with LED-television set and Wi-Fi, and can accommodate 20 passengers. Passengers could charge their mobile phones while they are in transit.

William Rael, 47, one of the drivers of the 45 units of e-jeepneys said he finds his work “easy and comfortable.”

“We also attended a seminar on proper driving. We were asked to drive slowly, at most 60 kilometers per hour, to avoid an accident,” said Rael, who also lives in the northern barangay of Basper.

The fare is P20 for regular passengers and P18 for students, persons with disabilities and senior citizens.

The ejeepneys in Tacloban is being run and operated by Star 8 Green Technology Corp. based in La Piñas City but Delgra said they are encouraging local operators to apply for franchise using the same vehicles.