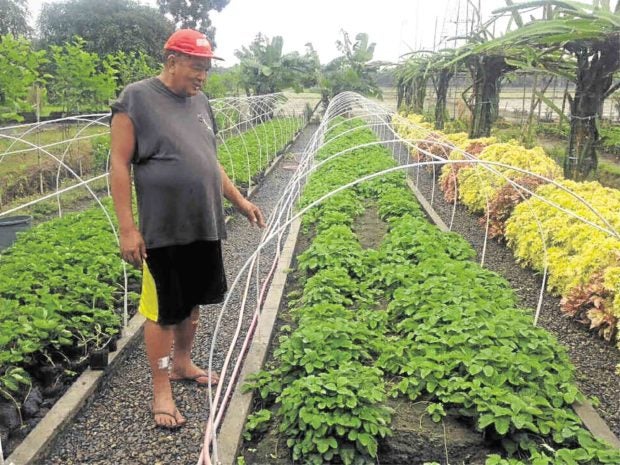 CALUMPIT, BULACAN—Despite an average temperature of 29 degrees Celsius, a farm here has set out to produce luscious strawberries in time for the next yuletide season.

The strawberries which people are accustomed to grow in cool climate areas, like Benguet province, where peak demand rises in January and February.

But farmer Andre Borja, 56, is growing 30,000 strawberry plants at the four-hectare Reyes Strawberry Farm in Barangay Calumpang here, which has become one of the province’s farm tourism destinations.

High tourist influx, in fact, costs the farm dearly when visitors plucked every berry they could find in 2017. “So many people came and we wouldn’t drive them away because it was nice to have that kind of attention. But almost 5,000 fruit-bearing shrubs were damaged and the rest were bought,” Borja said.

He started the strawberry farm in 2013, growing berries of the “Bicol Hawaiian variety,” which thrives in warm weather.

A native of Barangay Calumpang, Borja lived in Parañaque City for more than 30 years, working in a factory that produced fish balls, “kikiam” and squid balls until he decided to return home in 2013.

“I originally wanted to try my hand in palay which my father grew. I remember my dad and the field I inherited. My two children have completed their education so I decided to try farming and enjoy life as a farmer,” he said.

Borja’s father started with a hectare of land, but his sister, Elizabeth, later acquired three more hectares planted with vegetables and rice.

Borja said he was a self-taught strawberry grower, experimenting every step of the way.

He once applied vermiculture (a technique for enriching soil using earthworms) on his strawberry plants, but the worms ate the fruits, he said.

But he persevered, after discovering that the more his berries were exposed to the sun, the sweeter they turned out.

“Strawberry-raising is like marrying the one that you love,” Borja said, “because you have to regularly caress the berries.” His first harvests were from December 2016 to May 2017.

Borja said he wanted the farm to serve as a one-stop shop tourism site. He has planted grapes, guava-apples and dragon fruit, and expanded the menu of fruits he is making available for tourists.

According to Eliseo de la Cruz, Bulacan provincial tourism officer, the province has 26 farm tourism sites, some of them grow vegetables and flowers.—CARMELA REYES-ESTROPE