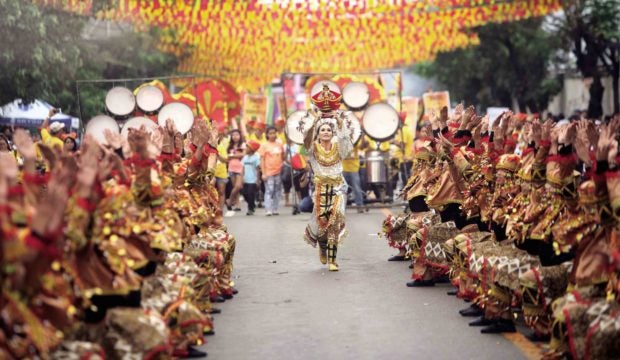 Despite the drizzle, the streets of Cebu City on Sunday turned into a spectacle of costumed performers, colorful floats, “higantes” and puppeteers parading to the sound of drums and trumpets.

In Aklan province, tens of thousands of Santo Niño devotees and revelers poured into the streets of the capital, Kalibo.

The merrymaking kicked off with a Mass officiated by Kalibo Bishop Jose Corazon Tala-oc in front of St. John the Baptist Church. Tala-oc called on the faithful to take care of their families, especially the children.

Later, the plaza erupted into drumbeating by Ati tribes and the raising of images of the Santo Niño to signal the start of street dancing around the Pastrana Park and adjacent streets at 2 p.m. It was expected to last until 11 p.m.

Both the Sinulog and the Ati-Atihan are held every third week of January to celebrate the feast of the Holy Child Jesus. The Kalibo festival is known for its unique and spontaneous “sadsad” (street dancing) accompanied by drums and lyres.

Winners were to receive a cash prize of at least P1 million in each category.

Msgr. Roberto Alesna, parish priest of the Archdiocesan Shrine of St. Therese of the Child Jesus in Barangay Lahug, was saying his homily during the Mass that kicked off the parade at Cebu City Sports Center when it rained for about 10 minutes.

During the “Prayers of the Faithful,” a brownout occurred when a balloon got entangled with a main line.

Alesna commended Cebu City Mayor Tomas Osmeña for implementing a liquor ban during the grand parade along a 5.3-kilometer route starting on New Imus Road. “This is one way of concretizing our devotion to the Santo Niño because faith without action is empty,” he said.

Police enforced the liquor and party ban within the 5-km radius of the route.

Mobile phone service was shut down starting 8 a.m. as part of the security preparations for the parade.

Smart Telecommunications said in an advisory that Smart, Sun and TNT mobile services were also cut during Kalibo’s Ati-Atihan.

Except for some problems of crowd control and petty crimes, the police did not receive reports of any untoward incidents during the Sinulog parade. A municipal councilor went to the Fuente police station to report losing his wallet containing P27,000.

The slow-moving contingents, along with the downpour and some technical difficulties, especially during the opening Mass, contributed to the delay. –Reports from Doris C. Bongcac, Nestle Semilla, Connie Fernandez, Jose Santino Bunachita And Steffi Nolido In Cebu City; and Nestor P. Burgos In Kalibo

Read Next
Small belly should be a must for new cops – Lacson
EDITORS' PICK
What to watch out for when selecting a video surveillance solution
Palace warns sugar hoarders after raid on Pampanga warehouse
Metro Manila’s COVID-19 cases on downward trend, but surge not over — OCTA
Unleash the photographer in you this World Photography Day with vivo smartphones
House energy committee chair Arroyo bats for cheap electricity
Look Through: The fate of impounded stray dogs
MOST READ
WATCH: Rick Astley re-creates ‘Never Gonna Give You Up’ music video 35 years later
DOJ indicts bank officer in $2.1 billion Wirecard fiasco
LOOK: Miel Pangilinan dazzles in glittery pre-debut shoot
Man abducted in Batangas gasoline station, found dead in Quezon
Don't miss out on the latest news and information.