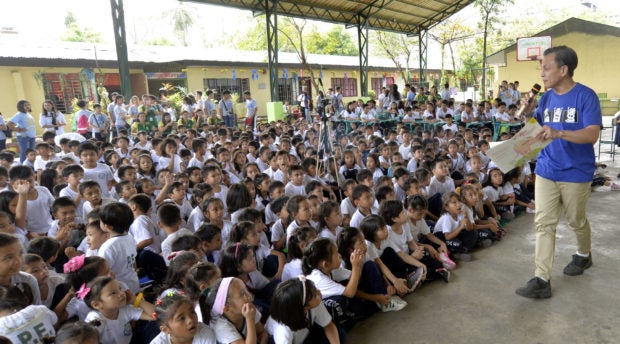 Stories of gratefulness, resiliency and generosity were told to some 600 children on Friday’s Inquirer Read-Along session at Banga Elementary School in Meycauayan City, Bulacan.

Comedian and impersonator Jon Santos led the session’s featured storytellers, with his lively reading of Virgilio Almario’s “Rosa Albina,” a story about a privileged and spoiled carabao who learns to be humble.

Santos said the lesson he wanted to impart to the kids was the importance of recognizing that they need other people and that their gifts on their own are not enough.

“There will come a day when your gifts are useless and you will rely on other people’s gifts, time, heart and patience. In other words, humility and gratitude are two things that hopefully, even if everything else is lost, will remain. And of course, love. Love for others,” Santos said.

The teachers told the classic Filipino fable “Si Pagong at si Matsing,” which tells how a sympathetic turtle outwits a selfish monkey.

Abacan, Justo and Rodriguez read Jeanette Patindol’s “Tight Times,” a story about a family of rats who struggled to get by but still managed to remain grateful and help others.

“When you see the eyes of a child and whenever we tell stories, I think it’s a moment that you can see innocence and it helps you realize that there are more simple things that you can appreciate,” Rodriguez said. 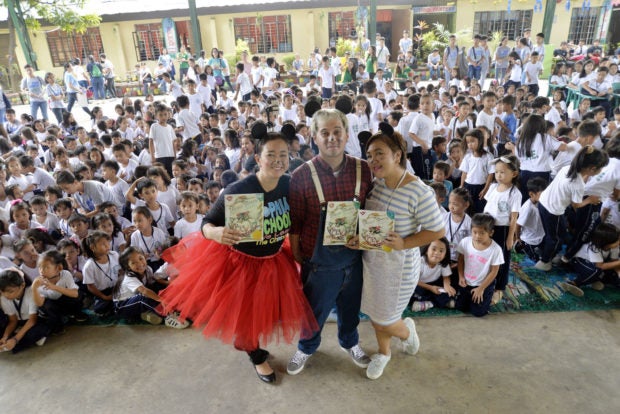 Everything comes from God

Student Irish, 10, said that like the rats, “we should not complain about what happens because everything comes from God, both good and bad things.”

Bryzen, 11, learned about humility, saying she liked Rosa Albina because the character who used to be proud became humble.

The morning session was the read-along’s 9th year collaboration with Adopt-a-Kid project, an outreach initiative of Sophian high school students for poor students in public elementary schools in this city.

The activity, which was part of Sophia School’s 23rd founding anniversary celebration and held in honor of its patron, the Holy Child Jesus, also included lunch and distribution of grocery packs from the Sophian community.