Retired US Army soldier shot dead while jogging in Bohol 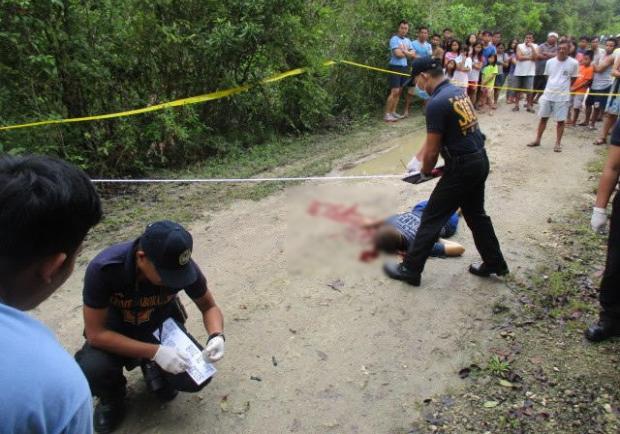 The body of retired US Army soldier Lonnie Simon Weig lies on a path where he was shot while jogging on Sunday morning, Jan. 21, 2018. (Photo courtesy of the Baclayon Municipal Police Station)

Lonnie Simon Weig, 63, had two gunshot wounds in the head and another in the abdomen, according to Senior Insp. Raymond Halasan, chief of Baclayon Municipal Police Station.

Weig was a retired United States Army soldier from South Dakota who opted to live in Purok 3 in Barangay Laya in Baclayon town. He had been living there for four years.

He was married to a Filipino wife, Rose, with whom he had three children.

Halasan said Weig went out for his morning jog past 5 a.m. on Sunday at Purok 7 in Barangay (Upper) Laya when shot.

Halasan said it was not clear if the perpetrators rode a motorcycle.

The crime scene, a rough road surrounded with trees, was at least 500 meters from the Weig’s house.

He was probably shot at close range since neighbors didn’t hear the gunshot, according to Halasan.

A neighbor, who asked not to be named, said that she heard motorcycles traversing in the place at dawn which was unusual on that time of the day.

The motive of the weekend killing was still unknown.

Police dispatch a tracker team to find the perpetrators.

Halasan said Weig was described by his neighbor as a good man.

The victim also had a good relationship with his family, he added. /atm