Thailand election could be delayed to 2019 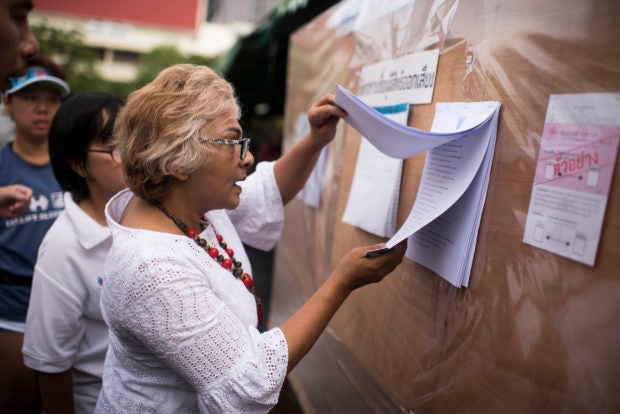 A Thai woman checks names at a polling station in Bangkok on August 7, 2016. AFP FILE PHOTO

The election is likely to be postponed until next year after a majority of the law vetting committee voted to write that the MP election bill should be enforced 90 days after  promulgation.

He refused to say whether the extension would cause the election to be delayed.

The charter states that the election should take place within 150 days after all the four laws, including the MP bill, were “in effect”. Taweesak said that the stipulation, first addressed under Article 2, still had to undergo deliberation by the National Legislative Assembly (NLA). A minority of members continued to argue that the bill should be effective as soon as it is promulgated, he said.

He insisted the committee had acted independently and there had been no pressure to prolong the road map. However, he refused to say who brought the idea to the committee.

The proponent of the move also proposed an extension of 120 days but the committee settled at 90 days.

Paradon Prisananantakul, the party’s former MP, said that although the delay was legally feasible, it would affect Prayut’s credibility.

However, no matter how the law turned out, Paradon said he believed politicians from all parties were ready to comply. Koravee Prasananantakul, also Chat Thai Pattana’s former MP, said the news about the 90-day extension may be a move to test reactions, although the government’s image would also be impacted, he said.

Despite the controversy, he said he believed all parties would equally fall under the same conditions so it would not prove advantageous to one particular group. But if the rules created inequality, conflict may arise, he said.

Siriphong Angkhasakulkiat, the former Si Saket MP, said he did not mind whether the election was held late this year or early next year, although the government should just be exact about the date.

People could have different perspectives about the legislation, he said, but in the end the voters would decide the election. Siriphong said he hoped political groups had learned a lesson from the issues that had arisen in the past decade.

Nipit Intrasombat, deputy leader of Democrat Party, wrote on Facebook yesterday the extension of the enforcement of the law could be against the Constitution.

He warned the powers that be that such an action could have consequence. In the past, the Pheu Thai Party tried to amend the Constitution and it led to a political crisis, he said.