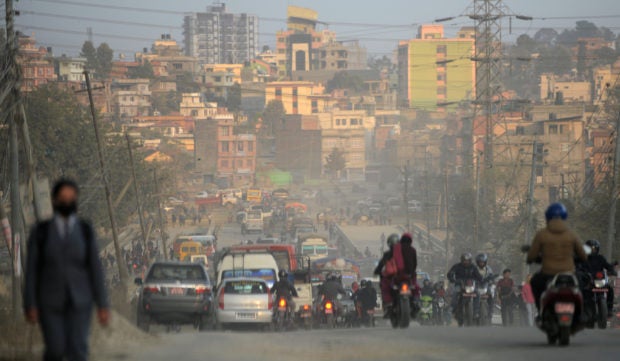 In this photograph taken on March 2, 2017, vehicles and motorbike riders travel on a dusty road in Kathmandu. Nepal’s government is trying to tackle rising pollution levels in the smog-choked Kathmandu Valley, but standing in the way is a powerful bus mafia that controls the capital’s roads. The rulers of Kathmandu’s roads are a web of transport syndicates made up of private bus owners that have repeatedly blocked official attempts to modernise the highly inefficient bus network.
/ AFP FILE PHOTO / PRAKASH MATHEMA /

Air pollution is one of the biggest environmental health risks facing people living in urban areas and even worse in places like Kathmandu because of rapid development and population growth, according to a government report.

Diseases caused by the air pollution kill 36 people out of 100,000 or 0.036 per cent in Nepal, a WHO report says. The UN body updated its Ambient Air Quality database in 2016 after collecting information from 103 countries. Air pollution causes serious health issues such as heart diseases, lung cancer, chronic obstructive pulmonary disease and stroke.

Recalling their early years of living here, senior officials told the Post on Saturday that the quality of air in Kathmandu Valley was not as bad as it looks nowadays.

Nepal Rastra Bank’s first Governor Himalaya Shumsher Rana reminisces, “Whenever we needed fresh air to breathe, we used to come out of our houses to the open spaces. Now there is neither sufficient open space inside Kathmandu Valley nor clean and fresh air anymore. There is pollution everywhere now.”

A weekly public campaign, demanding clean air for residents of Kathmandu, in its fourth week assembles senior officials from different sectors. They share their experiences of air quality in Kathmandu at the weekly event.

Dr Mrigrendra Raj Pandey says, “Air pollution was poor families’ concern in the past, but now it has become an appalling issue for all.

“In those days, pollution used to be mostly an affair inside houses of poor families, using traditional energy resources like firewood or cow-dung for cooking. Now, pollution is outside homes and everywhere. Not much is being done to control pollution.”

Others blame the increasing number of vehicles and government’s apathy for the deteriorating quality of air. This gets worse every year during winter in Kathmandu Valley.

“Living in clean air is birthright of every citizen, which no one needs to give, but the state has to guarantee. Supreme Court former Chief Justice Kedar Nath Upadhyay says, “The state’s failure to manage transport sector and never-ending construction works like Melamchi Water Project has decreased the quality of air.”

Former Election Commissioner Birendra Mishra says while the government must take immediate measures to control air pollution, it is everyone’s duty to contribute towards sustainable development.